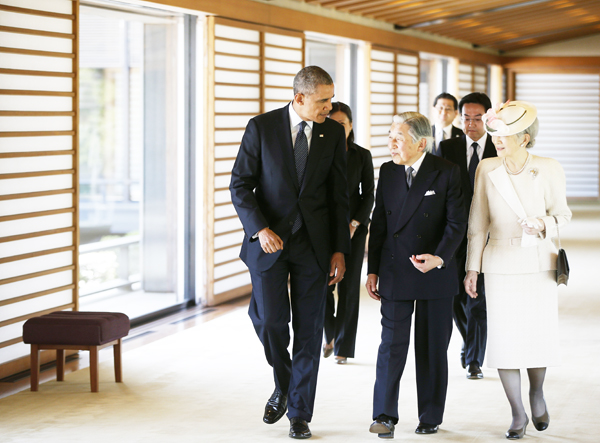 TOKYO - U.S. President Barack Obama affirmed yesterday that the United States would be obligated to defend Tokyo in a confrontation with Beijing over a set of disputed islands, but urged both sides to resolve the long-running dispute peacefully.

Wading cautiously through a diplomatic minefield, Obama insisted the United States takes no position on whether the islands in the East China Sea are the dominion of China or Japan. But he noted that historically Japan has administered the islands, and cited America’s treaty obligations to defend its ally should tensions escalate militarily.

“We do not believe that they should be subject to change unilaterally,” Obama said at a news conference with Japan’s Prime Minister Shinzo Abe. “What is a consistent part of the alliance is that the treaty covers all territories administered by Japan.”

The dispute over the islands, called Senkaku by Japan and Diaoyu by China, has badly strained relations between the two Asian powers. Although Obama has sought to avoid getting dragged into territorial disputes an ocean away, Japan and other U.S. allies see the disputes through the broader lens of China’s growing influence in Asia, where Obama arrived Wednesday at the start of a four-nation, eight-day tour.

Obama’s advisers insist that the trip - and the White House’s broader Asia policy - is not designed to counter China’s growing power, and they say the president is not asking Asian nations to choose between an allegiance between Washington or Beijing. “We want to continue to encourage the peaceful rise of China,” Obama said.

Seeking to inject fresh urgency into trade talks, Obama said the time is right to resolve issues hindering completion of the Trans-Pacific Partnership. The United States has been leading the 12-nation negotiations, but an end-of-2013 deadline was missed and there are few signs of progress toward resolving conflicts with Japan over tariffs and access to Japan’s auto market.

At the same time, as Obama pressed his case in Tokyo, he was unable to promise the full backing of the U.S. Congress, which would have to ratify any such pact. Lawmakers, including many of Obama’s Democratic allies, have so far refused to give Obama the fast-track authority needed to ensure an up-or-down vote on the final agreement. “Abe’s got to deal with his politics, I’ve got to deal with mine,” Obama said.

On the islands dispute, Obama encouraged the parties to work on the issue “through dialogue” and urged both sides to “keep the rhetoric low.” He downplayed the U.S. commitment to defend Japan as a matter of historical fact rather than a rebuke to China.

“The treaty between the U.S. and Japan preceded my birth, so obviously this isn’t the red line that I’m drawing,” the president said.

China has said it firmly opposes the application of the U.S.-Japan treaty to the dispute over the islands, which are in strategically important waters to China’s east. China’s government said this week that “the so-called Japan-U.S. alliance” should not get in the way of China’s territorial rights, urging the U.S. to play a constructive role in promoting regional stability.

Abe said he and Obama agreed to cooperate on engagement with China and other issues, including Okinawa, where the U.S. military presence remains a source of tensions. “The Japan-U.S. alliance is more robust than ever before,” Abe said through a translator.

Addressing another source of tension in the region, Obama said he’s not optimistic North Korea will change its behavior in the near future. But he said he’s confident that by working with Japan, South Korea and others - especially China - the United States can apply more pressure so that “at some juncture they end up taking a different course.”

Underscoring his concerns about Pyongyang’s behavior, Obama met yesterday with relatives of Japanese citizens that the White House said were abducted by North Korea. Obama recommitted to working with Japan to address the North’s “deplorable treatment of its own people,” the White House said.

Obama began his day with a call on Emperor Akihito at the Imperial Palace, a lush, park-like complex surrounded by modern skyscrapers where he was greeted by a military honor guard and children holding U.S. and Japanese flags. After taking in the scene, the president, emperor and empress walked along a maze of red carpet into the palace for a private meeting, with U.S. Ambassador Caroline Kennedy and other aides trailing behind.

Later Thursday, Obama planned to return to the Imperial Palace for a state dinner. He also planned to visit the Meiji Shrine, which honors the emperor whose reign saw Japan emerge from over two centuries of isolation to become a world power.

Obama’s Asia swing is aimed at reaffirming his commitment to the region even as the crisis in Ukraine demands U.S. attention and resources. The standoff between Ukraine and Russia threatened to overshadow the trip as the president weighs whether to levy new economic sanctions on Moscow.

His stops in Japan, South Korea, Malaysia and the Philippines serve as something of a do-over after he canceled a visit to Asia last fall because of the U.S. government shutdown. The cancellation provided fresh fodder for those in the region who worry that the White House’s much-hyped pivot to Asia was taking a backseat to other foreign and domestic priorities.