Divers’ search of Sewol winding up

Divers’ search of Sewol winding up 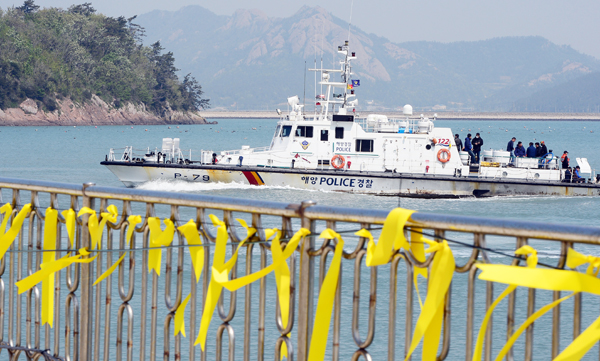 Families of passengers missing from the Sewol ferry ride a Coast Guard ship heading to the scene of the accident yesterday. Yellow ribbons, symbolizing the hope of a safe return of loved ones, are tied on the pier in Paengmok Harbor. [NEWS1]

The search by divers for survivors of the capsized 6,825-ton Sewol ferry is coming to an end as currents start to pick up in the area and families give up hope that anyone is still alive in the wreck.

Divers took advantage of a three-day neap tide starting Tuesday and have managed to remove the bodies of many victims since then. The official death toll rapidly increased from 65 Monday evening to 171 as of yesterday at 7 p.m. There are still 131 missing passengers.

But the so-called neap tide ended yesterday, and stronger currents will make the dives more dangerous. The families of the missing passengers also asked the authorities to wrap up the search and rescue mission yesterday.

“As it is the last day of the neap tide, we will spend as much time on the search and rescue mission as possible,” said an official of the Korea Coast Guard yesterday morning. “We are planning to focus on survivors on the third and fourth floors [of the ferry] simultaneously.

“The weather on Friday is expected to continue to be sunny with low waves,” an official of the Korea Meteorological Administration said yesterday. “But the current will become rapid again once the neap tide ends. Also, it is expected to rain over the weekend, especially at the accident scene, and strong winds are expected.”

The rescue operation included 212 ships, 34 aircraft and more than 700 personnel from the military, government and civilians. The bodies extracted from inside the ferry are being brought to a temporary morgue set up at Paengmok Harbor in Jindo, South Jeolla, the nearest mainland port to the disaster, for identification.

On Tuesday, rescuers found the body of the mother of Jo Yo-sep, an 8-year-old boy who was rescued by the Coast Guard on the day the ferry capsized. Jo was traveling with his parents and older brother. The corpse of the brother was found a week ago. The boy’s father is still missing.

The remains of the 45-year-old mother, who was identified only by the surname Ji, were found Tuesday and brought to the morgue. A DNA test was done and the body handed over to her family.

Another victim found was the mother of Kwon Ji-yeon, a 5-year-old girl who was also rescued alone on the day of the accident. The body of the 29-year-old woman was moved to the morgue on Wednesday night. Her family is awaiting a DNA test result before they hold her funeral. Kwon was traveling with her parents and an older brother. The bodies of the father and brother have not been found.

Four crew members of the Sewol stand in front of the Mokpo branch of the Gwangju District Prosecutors’ Office before they were arrested on charges of negligence that led to the deaths of passengers. [NEWS1]

The remains of a student recovered near the stern of the ship are believed to be those of the boy who first reported the accident to the Coast Guard. He was identified only by the surname Choi.

“His parents confirmed his look and clothes,” said a Coast Guard official. “But he hasn’t undergone the DNA test yet, so we don’t know for sure.”

“We are heading for Jeju Island,” he said, “and I think the ship is sinking.”

His call was three minutes ahead of the crew’s distress call to the Jeju Vessel Traffic Service.

The Coast Guard credits Choi’s call for allowing it to arrive on the scene as early as it did and to start saving lives, 174 in total. But Choi was not saved.

An investigation team formed by the police and prosecutors held a press conference yesterday at the Mokpo branch of the Gwangju District Prosecutors’ Office and said they began investigations on the final four members of the 15-person crew.

Earlier, the investigators arrested seven members of the crew including the 69-year-old captain Lee Jun-seok. Yesterday it arrested four more. The remaining four are now officially under investigation.

In the same press conference, the investigators said the cause of the Sewol’s sinking are a sharp right turn made by the crew member steering the ship; problems related to the loading of cargo in the ferry; structural changes in the ship from renovations; and rapid currents.

A more precise analysis is expected after the ship is raised from the water, which experts believe will take more than two months.