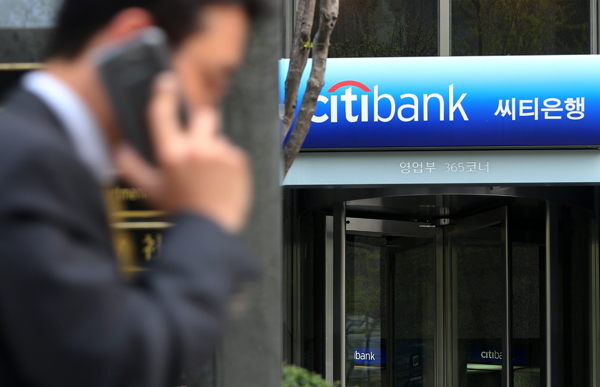 A man walks by Citibank Korea’s headqurters in downtown Seoul earlier this week. The bank is in a legal dispute between management and its labor union over planned closures of branches. [NEWS1]

Citibank Korea’s decision to shut down a third of its bank branches by the end of the year has spiraled into the banking industry’s first conflict between labor and management.

At a hearing on the injunction at Seoul Central District Court yesterday, the union emphasized that any branch closures should be discussed between the union and management.

“There wasn’t any notification of the decision before management announced it,” said Kwak Sang-eon, a union lawyer. Kwak is the son-in-law of late President Roh Moo-hyun.

The union said such an action ignores the bargaining rights of workers.

Management countered that the company has talked with labor since January, emphasizing that the shutdowns do not necessarily mean there will be layoffs.

Whether there was an agreement between labor and management on the decision to close the branches will be the key question of the case. The trade union of Citibank Korea filed two injunctions last week demanding that management withdraw its plan to close 15 branches in various parts of Seoul.

After the filing, the bank announced shutdowns of 10 more branches.

“The Citi case is known to be unprecedented in the banking industry ,” said an executive at a commercial bank. “This might affect other banks that are planning to reduce the number of unprofitable branches.”

Not only foreign banks like Citi and Standard Chartered, but also Korean commercial banks are considering restructuring due to falling profits since the 2008 global financial crisis due to low interest rates.

Citibank early this month announced it will close 56 of 190 branches by the end of this year to improve efficiency. Already, 25 branches have been told to close up shop.

The shutdowns are expected to be followed by layoffs of as many as 650 employees, according to the banking industry.

Citibank Korea said the shutdowns do not mean the bank will pull out of Korea.

The American bank’s net profit in the country has been sliced in half since 2011. Last year, it posted 219 billion won in net profit, which was lower than that of provincial banks like Busan Bank and Daegu Bank.

According to the banks’s union, service fees the Korea unit paid to the headquarters were excessive, causing the net profit to fall every year. The service fees are the cost of using overseas IT systems and networks and all costs of creating documents for headquarters.

Along with falling profits, employees of Citibank Korea have been discouraged lately due to the tattered reputation of the bank after information theft by a former employee. Last April, the employee stole the personal data of 34,000 customers and handed it over to loan marketers. The bank also was involved in the Financial Supervisory Service’s investigation into information leaks at other banks, which found information compromised for 10,000 more customers early this month.