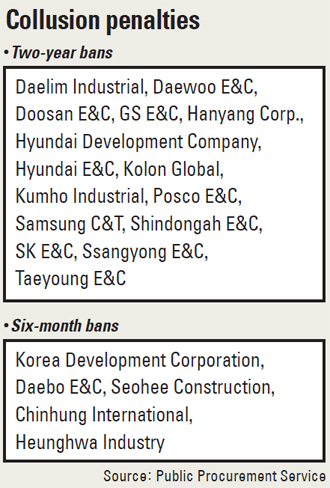 The PPS, which purchases goods for public organizations and manages government-owned properties, said that starting Friday, 16 builders will be excluded from bidding for two years and five for six months.

Among Korea’s top 20 builders by capacity, only five were not on the list. Hanwha E&C was the only company among the top 10 builders to avoid punishment.

No. 4 builder Daelim Industrial said in a regulatory filing the decision will affect 3.9 trillion won ($3.7 billion) worth of government contracts under negotiation, the equivalent of 40 percent of last year’s sales. That is the largest impact on any builder, followed by No. 3 builder Daewoo E&C at 3.5 trillion won.

Korea’s largest builder, Hyundai E&C, said it will have losses on 3.07 trillion won worth of government-issued orders.

In January, a Fair Trade Commission investigation found the 21 builders that were banned yesterday colluded in bidding for the Incheon Metropolitan Subway line No. 2 construction project that was issued in 2009. The FTC said they chose which company would win each of the 15 sections of the beforehand and the bid amounts.

The FTC ordered them a 132.2 billion won fine and also asked prosecutors to investigate which 13 criminal indictments handed down in March. The Incheon City Government recently said it may sue the indicted companies for damages.

The PPS reviewed documents from the FTC and statements submitted by the builders, and five midsize builders that acted as “puppets” in the bidding received lesser punishment.

The construction companies said they will appeal the ban no later than next week. Kumho Industrial already filed a suit to Incheon court yesterday against the PPS.

Industry insiders speculate such an action will buy the builders some time but fret about the impact on overseas order negotiations.

“Whenever these things happen, it affects local builders’ creditability in overseas,” said an official from Construction Association of Korea.