Businesses going under in wake of ferry tragedy

Businesses going under in wake of ferry tragedy 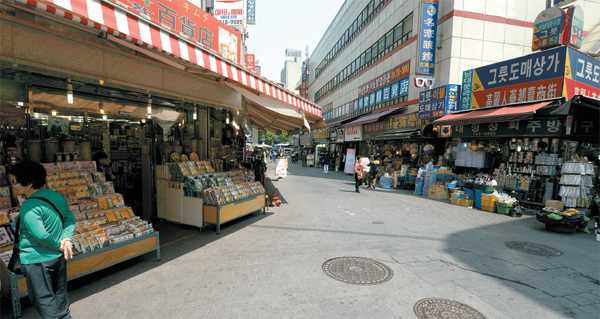 Namdaemun Market in downtown Seoul had few customers Wednesday as people limited their shopping in the wake of the ferry tragedy. There are growing concerns that the tragedy may have a lingering impact on the economy. [NEWS1]

Kim Jong-pil, head of OK Edutour, visited the Employment Support Center run by the Ministry of Employment and Labor last week. It was a glum pilgrimage.

Kim’s company specializes in arranging field trips for schools. Ever since the Sewol ferry capsized more than a week ago, carrying 325 students from Danwon High School in Ansan, Gyeonggi, on a trip to Jeju Island, schools across the nation have cancelled their scheduled trips.

Kim and his eight employees at OK Edutour are in trouble.

“All of our pre-reservations have been canceled,” Kim said with a sigh. “That means trips involving 10,000 students and total sales of 150 million won [$144,054]. I went to the Employment Support Center to ask its advice if I should close down the company or give unpaid leave to my employees.”

In Seoul alone, there are around 40 travel agencies like Kim’s that arrange school trips. Their businesses are the first to be affected by the tragedy that has already claimed 185 of the 476 passengers on the ship as of yesterday afternoon. But they’re hardly alone.

“It’s not just us,” said an official from one of the travel agencies. “Small companies that offered chartered bus services and also restaurants whose main sales were from school field trips will inevitably have to close down.”

The Sewol tragedy could affect businesses that have nothing to do with schools and travel. With the nation still in shock over the April 16 accident, consumers are refraining from going outside and spending money, raising concerns that domestic consumption will contract in the short to long term.

For example, the average weekend sales at each of the restaurants in Jidong Market in Gyeonggi was 3 million won in the recent past. Last weekend, however, sales dropped about 30 percent to an average of 2 million won.

Small businesses are particularly anxious that the economy will flatten out with a contraction in domestic spending. Their businesses are largely dependent on the domestic market, compared to big companies that also have overseas business.

There are growing concerns over regional economies that depend a lot on attracting tourists and holding festivals. According to the Korea Tourism Organization, more than 80 regional festivals nationwide have been either canceled or postponed.

But businesses can’t complain too bitterly at a time when the whole country is in sadness over the Sewol tragedy.

“May 5 is Children’s Day,” said Mrs. Lee, owner of a children’s apparel shop in Namdaemun Market in central Seoul. “Unlike in previous years, there are hardly any customers visiting to buy their children gifts.”

“I can’t complain about this,” she said. “And I can’t even shout that there are quality clothes in my store available at cheap prices. It just wouldn’t be decent.”

Lee said she tries to calm herself by thinking that things will go back to normal in a month.

“I’m ready to just close the door of my store for a while,” she said.

“Of our reservations for April and May, 90 percent have been canceled,” said an owner of a small, two-year-old travel agency. The impact is being felt harder by small and new companies.

“I’m also very saddened by the Sewol accident, but I hope at the same time that families would get out of their houses during the upcoming holidays and spend on what’s necessary.”

“Consumers are not spending,” said an official from the Ministry of Strategy and Finance. “It is true that small businessmen and those in the service industry are being hit. But it’s hard for us to go out and ask people to spend at a time when efforts are ongoing to find the missing people in the sunken vessel.”

Lim Hee-jung, a researcher at the Hyundai Research Institute, said, “Small-business people will be most affected by the drop in spending at a time like this.”

She added, “It would be good if people spend not by attending festive events that involve singing and dancing but simply going out with family and friends.”