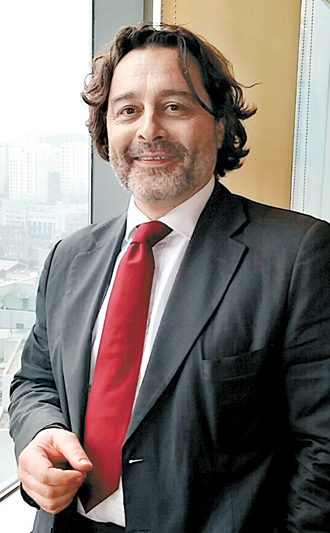 In the 21st century, French has been outpaced by other languages as a lingua franca. And with somewhat of an air of resignation, Arnaud Raynouard will admit it.

Still, the vice president of the Universite Paris Dauphine says France remains confident, in part because the country’s education system is uniquely French.

He explained it in fluent English, an obvious lingua franca.

“Although the United States is an obvious success story over 200 years, Europe is a success story over 2,000 years,” Raynouard said in a recent interview with the JoongAng Ilbo in Seoul, referring to the education systems on either side of the Atlantic. “Specifically, the French education system has over the years proven its efficiency. It has given foreigners an advantage in terms of quality and cost.”

Raynouard, a law professor, visited Korea at the invitation of the Institut Francais Seoul. The professor, who is in charge of international relations for the Paris university, said he noticed the misconceptions that some Korean students have about French colleges, mainly that they are difficult to get into because the courses are taught in the native tongue.

But that shouldn’t worry them anymore, he said, noting that a growing number of institutions in France, including his own, are significantly expanding their English lectures in their master’s and doctoral programs.

Even by using English in France, foreign students can still receive an education that is very much French, Raynouard added.

“It is different from the case-based approach in America,” he explained. “Instead of starting from specific cases and going back up, traditionally in Europe, and especially in France, you start with principles and with general concepts and you come back down.”

Such a methodology, he said, “gives you a very good understanding of a complex situation, because you always try to simplify things to get an overall understanding.”

In Korea, the most popular destination for advanced study overseas has long been the United States, with faculties at top-class universities in Korea dominated by doctoral degree holders from American schools.

Neither system is necessarily superior to the other, he said, though the teaching and learning styles differ.

The French academic circle also wants synergy in its research, with European countries as well as Asian nations.

Another distinction of French universities is that tuition costs tend to be comparatively lower than that of others worldwide, and education has long been considered a public good in France.

Raynouard previously spent more than four years with his family in Seoul as a young man. He remembers waking up to see a street full of tanks after President Park Chung Hee was killed on Oct. 26, 1979, by Korea’s top intelligence chief.