On the front line of war on malaria

On the front line of war on malaria 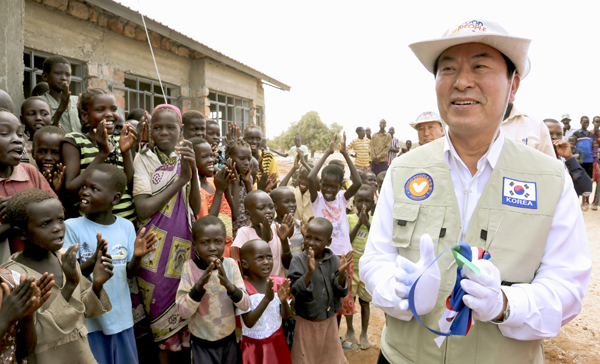 Five ambulances slowly entered a neighborhood in Kinshasa, Congo, where one of the biggest needs is anti-malarial medication. The vehicles were converted for medical purposes, but have not been used for years due to a lack of personnel.

Good People International, a Korean nongovernmental organization, hopes to change that, and recently recruited a medical team and initiated treatments. The aid group engages in activities geared toward development in underserved areas such as eradication of poverty, child protection, education, disease prevention and treatment, and emergency relief.

“I decided not to provide support temporarily, but actually extend the relief efforts for the people in Congo,” said An Jeong-bok, president of the organization. “Anti-malaria medicine and mosquito nets will be provided, and preventive measures against malaria will be taken regularly. When I faced those people, who live in such a dire environment, I came to the realization that we really need to help them.

“This is our 15th year, and we have founded many schools and medical clinics. We are planning to educate and train local medical professionals for future assistance.”

The JoongAng Ilbo recently sat down with An, 60, ahead of World Malaria Day yesterday at the headquarters in Yeouido. Below are excerpts from the interview.

Q. Why is it so difficult to eradicate malaria in Africa?

A. Africa has a tropical climate that is perfect for mosquitoes to reproduce. And the water supply, accommodations and sanitation are awful. Nearly 200,000 children under the age of 5 die every year from malaria and its side effects, which include fever and paralysis.

Is it difficult to prevent malaria?

Theoretically speaking, you should take one pill a week to prevent malaria. However, given that the pill is too strong to take regularly, Congo’s residents usually take the pill after malaria occurs. The cost is also a burden for them. This is why vaccination by pills only applies to foreigners. The best way is for residents not to be bitten by mosquitoes. Unfortunately, most children in Congo sleep under worn mosquito nets. We provide them with insecticide-coated nets that accommodate up to four people. It costs 6,000 won [$5.75] to 10,000 won for them to sleep protected for up to five years.

What about the medicine?

If you are bitten by a mosquito, a single anti-malaria pill can prevent a serious situation. It only costs 1,200 won. However, given that the cost of living in Congo is about 1,800 won a day, residents can’t afford two-thirds of their daily expenses and eventually die of high fever most of the time.