Abe’s history on sex slaves is of flip-flopping

Abe’s history on sex slaves is of flip-flopping 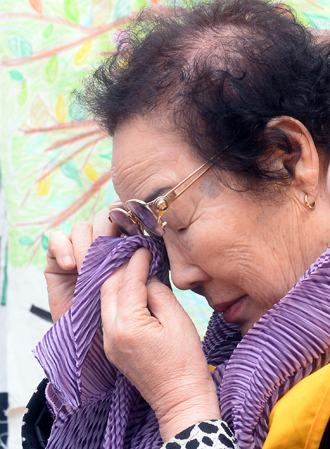 Lee Yong-soo, a former sex slave under Japanese coercion during World War II, attends a rally on April 9 in front of the Japanese Embassy in Seoul. [NEWSIS]

On March 14, Prime Minister Shinzo Abe of Japan’s right-wing Liberal Democratic Party said for the first time that he would uphold the landmark 1993 Kono Statement, which acknowledged and apologized for the Japanese military’s forcible recruitment of women as sex slaves.

But the remark was met with a lukewarm reception in Korea. Abe has been criticized for historical revisionism, especially for making a series of insensitive remarks over the years that add further insult to the women and girls from Korea and other Asian countries - including the Philippines, Taiwan, China, Hong Kong and Indonesia - who were forced into sexual slavery by the Japanese Imperial Army before and during World War II.

During his first term as prime minister from 2006 to 2007, Abe asserted that “there is no evidence to prove women were coerced into sexual slavery.” And several times since then, he has indicated his plans to review or even scrap the Kono Statement, going so far as to call the victims’ testimonies “complete fabrication” in March 2007.

These viewpoints have also been echoed in various addresses to the National Diet since he was elected for a second term in December 2012.

The alarm from Korea and other victim nations was well-founded. In February, the Abe cabinet announced it would “launch a team to re-examine and understand the background” of the testimonies of the 16 Korean women who were victims of sexual slavery in an investigation ordered by the Japanese government in late 1991.

Delicately evading exact wording, Abe stated at a budget committee of the parliament on March 14 that he has “no plans to revise” the Kono and Murayama statements in an attempt to ease tensions with Korea. His remarks were made just before trilateral talks among Korean President Park Geun-hye and U.S. President Barack Obama on March 26 on the sidelines of the Nuclear Security Summit in The Hague.

It was the first official talk between Park and Abe, as well as the first time they met. The two have not yet held customary bilateral talks even though Park assumed office in February 2013 and Abe in December 2012.

The lack of a sincere official apology and reparations from the Japanese government over this historical dispute has remained a thorn in relations between the two nations.

The Japanese military primarily forced women and young girls from Korea into sexual slavery, though from 1932 to 1945 they also coerced others from China, the Dutch East Indies and even Japan. These victims are commonly referred to as “comfort women,” known as wianbu in Korean and ianfu in Japanese. Records from the United Nations and key scholars estimate that approximately 200,000 were victimized, though the numbers vary depending on the study.

There are only 55 living Korean comfort women now, mostly in their 80s and 90s. That’s down from the 234 since 1992 who identified themselves as comfort women with the Korean government. The Kono Statement followed a Japanese government study in 1991 and states: “The Japanese military was, directly or indirectly, involved in the establishment and management of the comfort stations and the transfer of comfort women.”

It further states that the women were, in many cases, “recruited against their own will, through coaxing coercion, etc., and that, at times, administrative/military personnel directly took part in the recruitments.”

The 1995 Murayama Statement apologized for “following a mistaken national policy” and the damage and suffering it caused through “its colonial rule and aggression.”