Trash-talk about tragedy gets 18 people in trouble

Trash-talk about tragedy gets 18 people in trouble 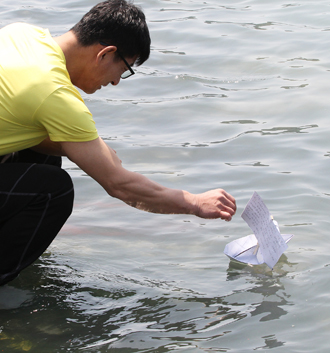 A relative of a passenger aboard the sunken ferry Sewol in the water off the southwestern coast releases a paper boat with messages yesterday to wish for safe return of his missing loved one at a port in Jindo, South Jeolla. [AP/NEWSIS]

As the entire country struggles with emotions over the tragic ferry accident, the police said they would not tolerate rumormongers and people who try to take advantage of the disaster.

But they are having trouble deciding what to charge them with.

The police have conducted a crackdown on people who allegedly spread groundless rumors or left slanderous comments on online bulletin boards. The authorities are investigating 76 cases and succeeded in tracing down 18 of the alleged perpetrators as of Thursday.

Among the 18 suspects, some uploaded posts on social networking services that read like appeals for help from passengers trapped in the sunken ferry.

One of the fake messages read, “Please forward this. Six people including me are in a room next to the cafeteria. Mobile phones are not working well. We can hear the sound of breaking windows but cannot see anything. Please come and help.”

Other people insulted the victims and missing passengers on Internet websites or through individual webcasts.

A 26-year-old woman surnamed Hong gave an interview to a local broadcaster claiming falsely to have been a rescue diver.

But police worry how to charge the people making mischief in the wake of the tragedy.

“The biggest problem is that there is no certain regulation they violated,” said So Wan-seon, chief of the cyber investigative team at the Incheon Metropolitan Police Agency. “There was a clause about seditious online communications that would have fit the situation perfectly, but the Supreme Court judged it unconstitutional. We are still looking for other regulations.”

“We are reviewing about 10 regulations related to the cases, but there is no perfect fit,” said Lim Ji-hwan, chief of the cyber investigative team at the Gyeonggi Provincial Police Agency. “Some of the suspects are minors aged 12 to 15, but we are planning to punish them as well given the importance of the issue.”

It is not the first time rumors and malicious comments arose after tragic accidents, but such behavior is more common thanks to the takeoff of social networking services in recent years.

Even after the police crackdown was announced, people were still posting idle rumors on Internet bulletin boards, mostly teenagers and people in their 20s, the police said in a statement yesterday.

Among the 18 people caught by the police, eight were teenagers and five were in their 20s.

“We will use as many personnel as possible to monitor and eradicate malicious rumors and comments both on and offline,” Kim Gui-chan, the investigation director of the police, said yesterday.

“I hope the public will not be deceived by those groundless rumors, and report any suspicious rumors or wrongdoers to the police.”