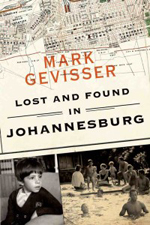 JOHANNESBURG - As a bookish child, Mark Gevisser played a game he has retroactively called “Dispatcher,” in which he would plot routes in his parents’ street guide, the Holmden’s Register of Johannesburg, using the index to place names.

“Inevitably, the ‘Dispatcher’ took me to places I was not meant to go,” he writes, recalling the time he stumbled across one of the few African names - “let’s call him Mphahlele, M” - in the book and discovered that the address was only two pages away from where he and his family lived on page 77.

But his family lived in the upmarket and whites-only suburb of Sandton while “Mphahlele, M” was in the neighboring black township of Alexandra, separated by only two pages and a stream - but worlds apart.

Gevisser says there was no way of steering his imaginary courier from page 77 to page 75 as “Sandton simply ended at its eastern boundary, the Sandspruit stream, with no indication of how one might cross it, or even that page 75 was just on the other side.”

“Lost and Found in Johannesburg” combines Gevisser’s memoirs of growing up in this segregated environment with a biography of his hometown. Along the way, it maps his family’s Lithuanian-Jewish past with his own journey of sexual self-awakening as he realized he was gay.

His description of being terrorized with friends in a home invasion drives home the point that Johannesburg’s racial and class divisions have made it an extremely dangerous city.

Gevisser, who is also the author of a widely acclaimed biography of former South African President Thabo Mbeki, spoke to Reuters by phone from his current Paris base about his new book and next project.

Q. In your lifetime, do you think Johannesburg will ever get over its apartheid past?

A. Apartheid is inscribed into the planning of Johannesburg. And the inequality in South African society that is increasing means that I don’t see any way that it will get over its apartheid past in my lifetime. What is changing and what will continue to change dramatically is the growth of a black middle class and the way the previously white neighborhoods are becoming more mixed.

Do you think Johannesburg’s maps are still somehow deceptive?

Sure, in the way that all maps are deceptive ... So when you look at a map of Johannesburg you can obviously see where the blocks are smaller and where they’re bigger. But you can’t see anything about how dramatically different Alexandra is from Sandton. And even if you look on Google Earth you will notice a certain density in Alexandra and a lack of trees in Alexandra as opposed to the space and the green in Sandton. But that doesn’t tell you anything of course about how different life is in those two places.

Are you ever going to come back to your hometown to live?

At the moment I’m not living in my hometown but I spend a lot of time there.

I’m definitely coming back to South Africa there’s no question about that. Whether I come back and live in Johannesburg will depend on where I have work and where my partner has work.

What’s next is that I’m an Open Society Fellow at the moment working on a project called the Global Sexuality Frontier.

So I’m writing a book about this new global conversation on sexual rights.

What do you think is driving this new wave of homophobia in Africa?

I think it’s a manifestation of new global culture wars that’s found a battle ground over sexual rights. And it’s a backlash against a younger, globalized generation which is very in tune with the rest of the world.