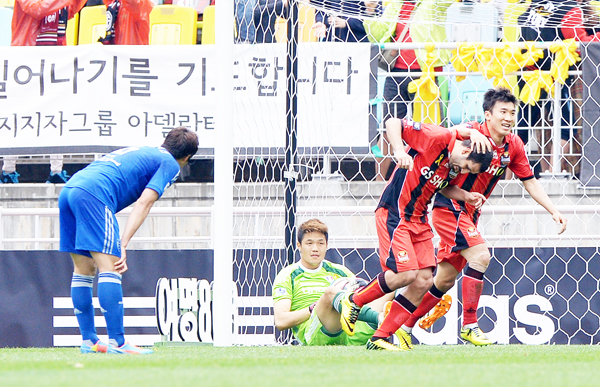 Sergio Escudero of FC Seoul, second from right, celebrates after scoring a goal against the Suwon Samsung Bluewings yesterday at the Suwon World Cup Stadium in a Round 10 K-League Classic match.[NEWS1]

SUWON, Gyeonggi - FC Seoul overpowered their biggest rival, the Suwon Samsung Bluewings, 1-0, thanks to a goal by Sergio Escudero in the 77th minute.

In Round 10 of the K-League Classic held at Suwon World Cup Stadium in southern Gyeonggi yesterday, about 29,300 fans who didn’t want to miss the league’s best rivalry gathered despite the chilly and rainy weather. The fans on each side stood to watch the match and cheered whenever their sides made a fine play, but there was no loud music or cheerleading. Instead, fans hung banners of condolences to the missing students of the Sewol ferry disaster.

Suwon Samsung Coach Seo Jung-won started the match with his 4-2-3-1 formation, placing Jong Tae-se on the top of the offense line with Yeom Ki-hoon, Seo Jung-jin and Santos backing him up and Kim Doo-hyun and Kim Eun-sun as two defensive midfielders. Jung Sung-ryong was the goalkeeper.

The match intensified in the second half as the two clubs aggressively attempted to score, but Suwon dominated the first 20 minutes as midfielders Yeom and Santos and striker Jong consistently penetrated the opponent’s area. Yet Suwon failed to make any accurate passes on scoring chances and allowed a goal to the FC Seoul, which mostly spent the second half on defense and counterattacks. Defender Kim Chi-woo penetrated the Bluewings’ penalty box after breaking their offside trap, then delivered a pass to Escudero, who easily put the ball into the net with his left foot.

“A match with the Bluewings is always a hard one,” said Coach Choi after the match, “but I think our defenders and midfielders effectively dominated the midfield areas.”

On Saturday, the Jeonbuk Hyundai Motors led by Coach Choi Kang-hee destroyed Gyeongnam FC’s defense in a 4-1 victory at home in Jeonju World Cup Stadium. With the victory, the Motors increased its winning streak against Gyeongnam FC at home to eight games and its league streak to three games, including wins over the Ulsan Hyundai Tigers and Chunnam Dragons.

With the win, the Motors have 20 points on six wins, two draws and two losses.

The Motors took an easy 1-0 lead in the 28th minute, thanks to an own goal by defender Sreten Sretenovic. Leonardo’s cross, attempted from the right edge of the penalty box, ran into the net after hitting Sretenovic’s foot.

The Motors expanded their lead in only two minutes. Lee Seung-ki made a short pass to teammate Lee Jae-sung at the center penalty box area, then Jae-sung blasted a shot into the net with his left foot.

Lee Dong-gook scored with a penalty shot and midfielder Kaio Goncalves expanded the gap with a goal in injury time.