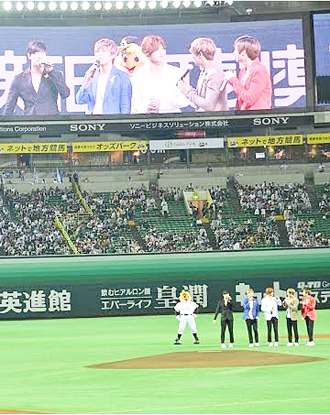 K-pop boy band U-Kiss threw the opening pitch of the Japanese Baseball League game between the Softbank Hawks and the Seibu Lions on Saturday at the Fukuoka Yafuoku! Dome. The boys wore yellow ribbons on their chests as a sign of support for the missing passengers aboard the Sewol ferry.

The appearance by U-kiss was thanks in part to Lee Dae-ho, who has played for the Softbank Hawks since December.

As they entered the stadium, U-Kiss acknowledged the tragedy in front of the Fukuoka audience.

“We wish everyone will not lose hope,” they said.

The boy’s agency, NH Media, said that organizers weren’t aware of their plan to mention the Sewol tragedy. “Since there wasn’t any prior discussion with the local broadcasters and the Softbank Hawks, we’re sorry if we caused any problems,” it said.

The NH added, “Many Japanese audiences have expressed their sympathy for the victims of the Sewol, most of which were high school students on a class trip.”

Since last week, scores of Koreans have worn yellow ribbons as a symbol of support to the survivors and victims of the ferry, which was carrying 476 passengers on April 16 between Incheon and Jeju Island before it started to capsize in the waters off the southwestern coast.