Korean investors are turning to U.S. and China

Korean investors are turning to U.S. and China 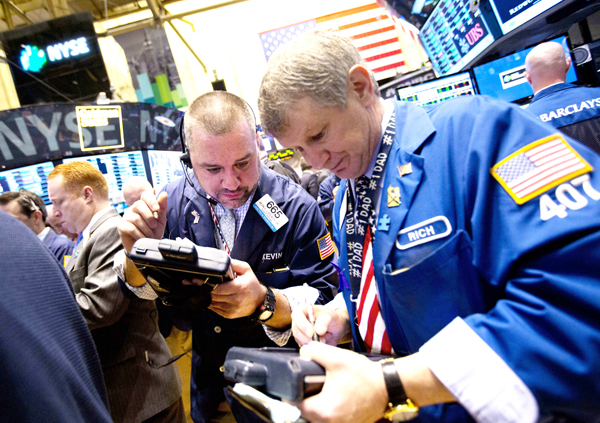 Since late January, a 45-year-old investor has placed 50 million won ($48,000) in U.S. exchange-traded notes (ETNs) into a coffee bean investment.

He started investing in coffee beans because his friend, who runs a coffee shop, told him that bean prices would likely rise sharply due to a drought in Brazil.

He chose ETNs because they are traded like an exchange-traded fund (ETF), but they guarantee regular dividend payments like a bond.

“I had to turn to the U.S. [market] since it’s hard to find [financial] products in Korea that invest in coffee beans,” the investor, who requested anonymity, said.

“The benefit [of investing in overseas markets] is that, although I do pay capital gains taxes on the profits that I make, the profit is not included in the comprehensive financial income tax.”

As of April 17, the investor has seen a 62.5 percent profit increase on his ETN.

Earlier this year, a 74-year-old investor put 200 million won into a high-yield bond ETF investing in the U.S. stock market. The investment was first proposed to him by a private banker at a local brokerage firm.

The investor said the product was attractive for someone like him because it promised a steady monthly payment for someone who doesn’t hold a job.

“Here [in Korea] there’s not much diversity in [financial] products that promise monthly dividend pay,” the investor said. “Since I bought the product, I have been receiving 800,000 won or so every month.”

As the local stock market has been stuck in limbo and shows almost no sign of a significant boost anytime soon, many Koreans are once again turning to overseas markets. They are not institutional investors but retail investors who make purchases from home trading systems or their mobile trading service.

According to the Korea Securities Depository, in the first quarter of this year nearly $1.8 billion was invested in overseas markets. That’s 26 percent more than in the previous quarter and 361 percent bigger than investments made a year ago.

Such a shift started increasing last year. Koreans cut back on overseas stock investments in 2011 and 2012 as the global markets’ volatility rose on concerns over Europe’s mounting debt and another wave of economic slowdowns in advanced economies like the United States and Japan.

But the situation has been improving as advanced economies have met a mild recovery since the second half of last year.

In 2013, investments in stocks overseas amounted to nearly $5.5 billion. That’s an 85 percent increase from 2012. The United States accounted for 65.8 percent of all overseas stock purchases made by Koreans.

“Investors had to turn their interest to overseas markets since the Kospi barely moved,” said Min Seong-hyun, of Samsung Securities. “But Korean investors have also been showing interest in overseas markets because there is a greater diversity of products that are difficult to find in Korea.”

At the moment, the overseas market is almost synonymous with the U.S. stock market. In the first quarter of this year, 70 percent of stocks bought overseas were in the United States. The situation was the same last year as 66 percent of overseas investment flowed into the U.S. market.

Data from Samsung Securities, Shinhan Investment and Woori Investment and Securities showed that Korean investors were not only buying blue chip shares like Apple, Google and Visa, but were also betting on indices products like leverage or inverse ETFs.

There are more than 1,500 ETFs in the U.S. stock market. This is much larger than the 149 ETFs investing in the Korean markets. Due to the large number of ETFs, investors can pick the type of investments that they like, including a bond ETF that offers monthly dividends to investors.

Recently, inverse treasury ETFs have become popular as the possibility has increased of an interest rate rise since the U.S. Federal Reserve began tightening its liquidity supply. This is an ETF product that profits when bond value drops on the back of rising interest rates.

Some investors are buying up Russia-related ETFs because stock values in the Russian market have fallen as the crisis in Ukraine has deepened.

It’s not easy to find investment products in the local market related to Russia.

Some investors are targeting high-risk, high-return investments. These are products for investing in small and midsize companies, which are seeing rapid growth as the economy recovers.

Korean investors are mostly interested in IT companies listed on the Nasdaq including Google, Tesla and Amazon.com. Last year, the secondary U.S. stock market index rose 32 percent. The market was on an upward swing until Federal Reserve Chairwoman Janet Yellen hinted of a possible hike in the interest rate earlier this year.

The Nasdaq has quenched Korean investors’ thirst for high returns that have been absent from the Korean market.

But this year, Korean investors have been pulling out of Nasdaq as concerns rise that the values of the companies traded on the secondary market are too inflated.

“The situation is different from the dot-com bubble burst in 2000, and therefore I recommend that investors hold onto their stocks as a long-term investment instead of selling them off right away,” said Min.

One of the attractive factors in investing in the U.S. market is fewer regulations.

An investor can buy a single share if it is valued at 50,000 won or more. The investor has to buy more than 10 shares when the company’s stock value is less than that price.

Lately, Korean investors have been aggressively increasing their investments in China and Hong Kong, even though the Chinese economy has been losing steam since the second half of last year.

The Shanghai and Hong Kong stock markets are the second and third most popular among Korean investors. The two account for roughly 20 percent of all overseas market investments by Koreans.

In Shanghai and Hong Kong, Korean investors are also very interested in IT companies such as Lenovo, which came into the spotlight after it acquired Motorola and the game company Tencent.

“It’s true that Korean investors’ interest in the Chinese markets isn’t like it was when it peaked [in the mid-2000s],” said Lee Yong-hoon, who heads the overseas stock market team at Shinhan Investment. “However, investors betting on the growth of new industries such as IT and health care and environment-related businesses [in China] has been growing since the middle-upper class in China has been growing along with awareness of the environment.”

“Until 2012, the Chinese companies that were traded on the U.S. stock markets - such as the TAL Education Group or Tudou Holdings - were popular,” said Lee of Shinhan. “But as the Chinese markets have become more transparent, investors are now more interested in companies that are listed on the Hong Kong market.”

Before the global crisis, which started with the downfall of Lehman Brothers, the funds were enjoying exponential growth and nearly every retail investor was rushing to the bank to subscribe to funds investing in the Chinese economy. At the time, China was enjoying double-digit growth. However, the market retreated as quickly as it rose and investors suffered huge financial losses while the global market started to crash.