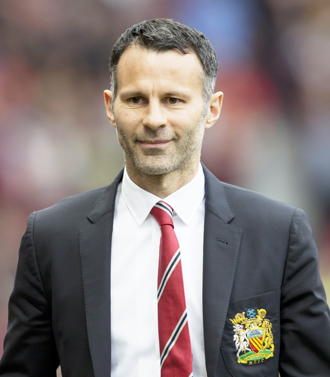 Manchester United’s interim manager, Ryan Giggs, with his tufts of gray hair and smart club suit, strode onto the Old Trafford turf and got a hero’s welcome on Saturday as he launched a new phase in his career and a fresh start for the club.

Ninety minutes later with a 4-0 victory over relegation-threatened Norwich City safely wrapped up, the home fans were able to digest what they had seen - a glimpse of the future as well as a snapshot of the past.

The shackles of the sacked David Moyes’s cautious regime had been cast off and United’s players, who looked clueless in a 2-0 defeat at Everton the previous weekend, played with freedom and confidence - just as they did under former boss Alex Ferguson.

The 40-year-old Giggs, after 962 appearances for the club and 25 major trophies, arguably understands better than anyone what made United such fearsome opponents under the fiery Scot.

And, like Ferguson, Giggs did not shy away from the big decisions.

His first team selection raised eyebrows with 37 million pound ($62.2 million) Spaniard Juan Mata left on the bench and another of Moyes’s big buys, Marouane Fellaini, left out of the playing squad completely.

United took time to get into gear and for most of the first half the team showed many of the failings that dogged it under Moyes.

Players lacked dynamism and pace in attack and over-played in and around the penalty area.

But from the moment Wayne Rooney opened the scoring from the penalty spot after 41 minutes, the shackles were cast off.

Rooney curled in a superb second goal minutes after the restart before Mata came on to grab two poacher’s goals.

“I reminded the players the tempo needed to be quicker at halftime and they reacted well to that,” Giggs added. “I enjoyed it; 4-0 is a dream day for us, I’m really pleased with the performance. It’s good to end the day as we did; scoring goals and creating chances.”

With media reports suggesting United already has agreed to bring in Netherlands Coach Louis van Gaal, a claim denied by the club, Giggs probably does not see his future at the helm beyond the end of the current campaign.