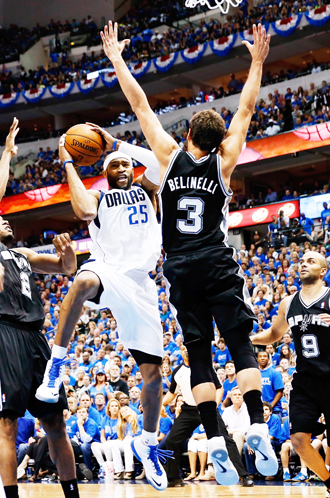 Vince Carter knew right away the exact date of the last time he had a buzzer-beating try in a playoff game - 13 years ago.

It’s seared in the memory of the 16-year veteran because he missed that one. He was on target Saturday.

Carter hit a double-pump 3-pointer at the buzzer to give the Dallas Mavericks a 109-108 victory in Game 3 and a first-round series lead over the top-seeded San Antonio Spurs.

With 1.7 seconds left, Carter took an inbound pass from Jose Calderon in the left corner. After a quick pump fake got Manu Ginobili in the air - moments after the Argentine guard had given the Spurs the lead - Carter released the ball just in time.

He strutted stone-faced toward Dirk Nowitzki, who was waving his arms wildly as he jumped on Carter. Mavericks owner Mark Cuban joined the celebration on the court before the automatic review confirmed the obvious: The shot was good.

And it’s one Carter said he practiced.

“May 20, Game 7,’’ said Carter, referring to an 88-87 loss to Philadelphia in the 2001 Eastern Conference finals when he was the dunking sensation known as “Vinsanity’’ with Toronto. Carter had graduated from North Carolina earlier that day before flying on a private plane to Philadelphia.

“I don’t mind taking the game-winning shot,” said Carter, who otherwise had a rough day before finishing with 11 points. “I don’t mind missing them, and dealing with it. So I think having that mentality helps me.”

Monta Ellis kept the eighth-seeded Mavericks close in the fourth quarter and finished with 29 points.

Game 4 is Monday night in Dallas.

Ginobili, who scored 12 points, dribbled out most of the last 24 seconds before going around Duncan and scoring over Samuel Dalembert for a 108-106 lead. His go-ahead shot spun around the rim and almost came out before falling in.

The Mavericks kept the home-court advantage they earned by taking Game 2 in San Antonio to snap a 10-game losing streak against the Spurs.

And Dallas won despite the Spurs holding Nowitzki under 20 points in a third straight playoff game for the first time since they did it to him in his first postseason in 2001. The big German finished with 18.

Dallas still had a chance in the closing seconds because of Ellis, who had a playoff career high that included 12 fourth-quarter points. He tied the score twice in the final 1:10, first with a three-point play on a floater after he was fouled by Boris Diaw.

After Diaw put the Spurs back in front with a baseline jumper, Ellis hit another high floater in the lane with 24.9 seconds left, setting up Ginobili’s dramatic shot.

Tony Parker had 19 points, but just two after halftime for the Spurs. Tiago Splitter had 14 points and 13 rebounds and Kawhi Leonard awoke from a series-long slumber with 17 points, including a big 3-pointer in the fourth quarter.

Dalembert did most of his damage in the first half but still made his presence felt after halftime, finished 13 points, 10 rebounds and four blocks and making two free throws for a 104-all tie after rebounding a Nowitzki miss.