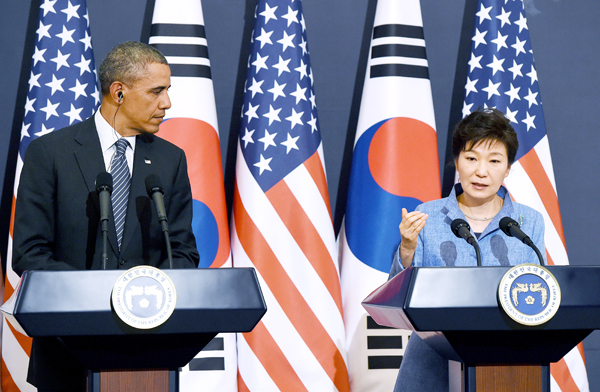 Diplomacy is challenging, and it is all about interpreting words. Qian Qichen, former vice premier who is considered the father of Chinese diplomacy, wrote in “Ten Episodes in China’s Diplomacy” that some things must be said officially while others are better to be said behind closed doors.

In this context, U.S. President Barack Obama had some unexpected responses in our interview. He said that while he welcomes President Park Geun-hye reinforcing economic cooperation with China, the United States is the foundation of Korea’s security and prosperity. He was surprisingly straightforward. Since the launch of the Park administration, Washington has been dissatisfied with Korea-U.S. relations. Considering the traditional alliance with America, Korea is too close to China. However, neither the White House nor the U.S. Department of State expressed it out loud. But the day before his fourth visit to Korea, President Obama explicitly said it.

And he didn’t stop there. While explaining the correlation between the “pivot to Asia” and the Korea-U.S. alliance, he underscored that America was the only superpower in the world. Connecting the two sentences, it effectively means the United States is the most powerful country, so Korea should not completely be on China’s side, though it may be friendly with Beijing.

Since the Ukraine crisis, Obama’s diplomacy has been under fire. The Republican Party criticized Obama for his feckless diplomacy, so he is making up for the loss in his Asia tour.

However, the Korean government cannot afford to overlook the direct speech of the U.S. president. We want to avoid having to choose sides between America and China. The Obama administration has two objectives in its Asian tour. The first is to make progress in the Trans-Pacific Partnership talks, and the other is to complete the frame of alliance in Asia to check on China’s expansion. The Seoul-Washington-Tokyo security alliance is a good example, as America is wary of Korea being too close to China.

We felt secure by the traditional alliance because it was a constant in security. But if the United States grows discontent and the alliance becomes a variable, Korea’s diplomacy will become far more complicated.

America’s perspective hasn’t changed in the past 20 years. When U.S. President Bill Clinton visited Japan in May 1996, Joseph Nye, then the assistant secretary of defense for international security affairs, said the U.S. Forces in Asia provide the oxygen for the East Asian economy to breathe. We can take a peek into the root of Washington’s discontent over the Seoul-Beijing ties.


*The author is the JoongAng Ilbo Washington bureau chief.