Infamous selfie not a problem with president

Infamous selfie not a problem with president 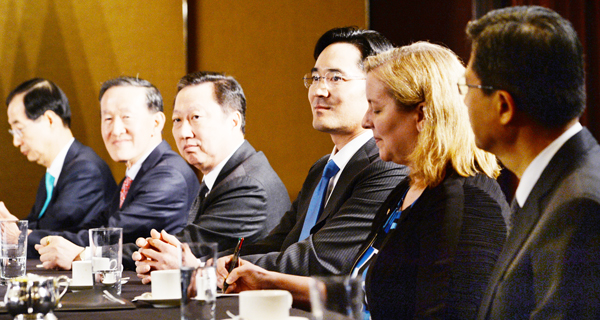 As far as U.S. President Barack Obama is concerned, the selfie taken of him with a Galaxy Note was no problem.

According to sources in the business community, that’s what Obama told Samsung Electronics Vice Chairman Jay Y. Lee at a breakfast meeting with business leaders Saturday at the Grand Hyatt Hotel.

The event was hosted by the American Chamber of Commerce in Korea.

David Ortiz of the Boston Red Sox, who won the World Series last year, took a selfie with Obama with his Galaxy Note 3 during a ceremony on April 1 on the South Lawn of the White House.

It became a sensitive issue when the White House announced that it opposed Samsung using the photo for commercial purposes.

Considering Obama’s remarks to Lee and the fact that the White House has been testing Samsung smartphones, industry sources predicted that the selfie controversy will not become a hurdle in the devices being chosen by the White House for its staff.