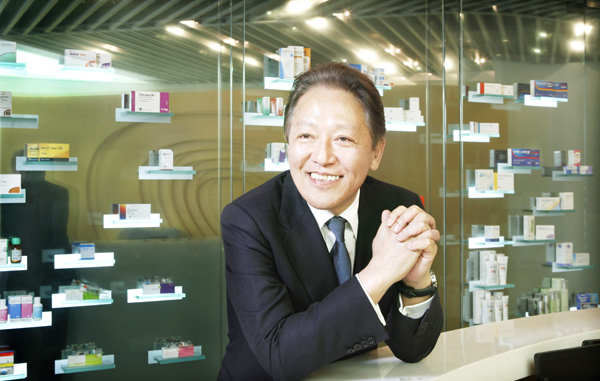 Kim Jin-ho, managing director of GlaxoSmithKline (GSK) Korea, leads with a fighting spirit and a positive mind-set. He likens a company to an “organization being,” which, unlike a human being, is able to last a long time if the boss and employees continuously seek to “rejuvenate.”

“There are several important factors to a competent leader,” Kim said in an interview with the Korea JoongAng Daily last month at his office in Yongsan, central Seoul. “The most basic ones are to analyze current [business] conditions, provide motivation [to employees], draw up new strategies and seek success.

“A more important factor for a leader, though, would be to try and rejuvenate an organization by maintaining sensibility.”

Kim’s career in pharmaceuticals began in 1977 when he joined Youngjin Pharmaceutical, a company his father founded in 1962. After spending more than 10 years at Youngjin, Kim joined Glaxo Wellcome, a British pharmaceutical company, in 1997 as managing director. In 2000 Glaxo Wellcome merged with SmithKline Beecham, which became GSK.

Kim said that at GSK, the largest health care company in the United Kingdom, there is a growing focus on bioelectronics, an emerging field that mixes information technology with pharmaceuticals. In the long run, bioelectronic medication will help treat diseases by modulating electrical signals that control body functions.

“This effort made by GSK is largely related to the Korean government’s efforts to boost creative economy,” Kim said. “Our headquarters believes that Korea is a country where much progress can be made in the area [of bioelectronics].” 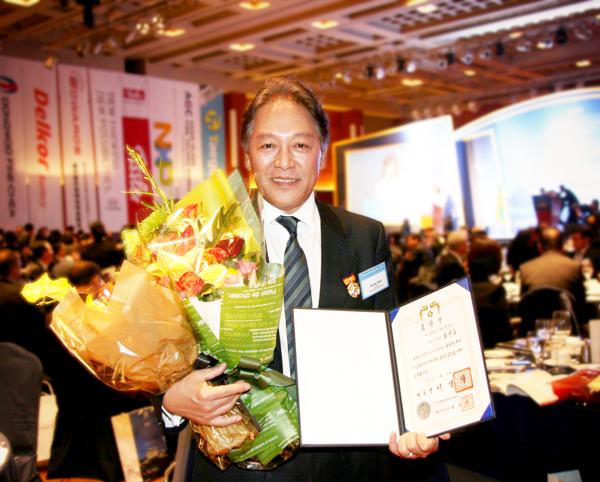 Kim Jin-ho, general manager of GSK Korea, receives an award from the Ministry of Knowledge Economy (now Ministry of Trade, Industry and Energy) for his contributions in expanding foreign investment and employment in 2011. Provided by the company

Q. What opportunities do you see in Korea for the bioelectronics field?

A. When it comes to GSK’s research and development investment in Korea, there is a focus on development, like conducting clinical tests. In such an environment, the opportunity we see in Korea is that there can be more investment in the bioelectronics sector. What this means is that there is an opportunity to merge Korea’s IT industry and GSK’s basic science [to provide better health care]. In simple terms, the most complex organ in the body is the brain. It is the brain that controls organs and sends signals. But although the brain sends signals, we cannot guarantee that it sends 100 percent correct messages to the organs. There can be wrong messages being sent. What bioelectronics focuses on is to inject an electric device into the nerves so that they are able to detect whether or not the messages sent by the brain are correct or incorrect. And if incorrect messages are detected, then correct messages can be sent. It is an electric device that reads and sends signals but it is basic science that decides what correct signals should be sent and how they should be sent. This is an area that can be contributed to by pharmaceuticals.

What efforts are being made in the field of bioelectronics by GSK Korea?

GSK has a big interest in Korea in this field. [As for partnerships with local firms,] we are in the process of searching. What I can say is that the Korean government should take more notice of this field and do its part [in terms of policies]. Our headquarters have been focusing on this field for a long time. Recently, our chief of R&D visited Korea [in February] and it’s my sense that he judged Korea to be adequate [for developing bioelectronics].

GSK is involved in three large medical businesses - pharmaceuticals, vaccines, and consumer healthcare. Which business is highlighted the most in Korea?

It’s all three. Pharmaceuticals is an area that created the base [for business] in the Korean market and as for vaccines, there are not only those for children but also for adults. As for consumer health care, our business in that field is based on science. For example, the products we offer are skin cares proven by science, and oral cares also proven by science. What’s important to note in all three areas is that in Korea, the population is aging. And whether it be anticancer treatments, chronic diseases or rare diseases, taking the aging population into consideration is important.

What are your plans for releasing new drugs in Korea?

Last year, GSK was approved the highest number of new drugs by the Food and Drug Administration in the United States. Of the 27 new drugs that were approved, six were by GSK. It is rare for one company to receive so many. In North Asia, we plan to launch 17 new products and indications in three years starting in 2014. This has never been the case before. There will be many products introduced. But there will be an issue of to what extent those new drugs will be recognized in terms of value [price].

The Korean government has been sticking to its low-price drug policy. Does this kind of policy have an effect on multi-pharmaceutical companies like GSK when releasing new products?

When it comes to new drugs - and this does not only apply to drugs introduced by multi-pharmaceutical companies in the Korean market but also to drugs developed in Korea - there is a system called international reference pricing, or international price comparison. If you think about it, companies will release new drugs in markets with better pricing, not in countries where products are not valued by pricing. Unlike in the past, there is a network where companies compare product prices in each market. This issue will become more sensitive in the future.

I’m aware that GSK as a whole has declared a change in sales and marketing methods. How involved is GSK Korea in this grand plan?

A change [in sales and marketing] has been something that GSK CEO Andrew Witty has been thinking about for a long time. Thoughts would include how to promote sales that center more around patients, and how to promote R&D that focuses on patients. What we concluded we should do for patients was that we should provide more services, not for commercial purposes. As for GSK Korea, from next year, there will be no sales target for sales representatives. This will be applied [in the local market] from January 1. Other countries have launched such an initiative. The countries I’m in charge of [Taiwan and Thailand] will apply this policy from July 1. Rather than focusing on the numbers to evaluate sales representatives, we plan to provide incentives to them by evaluating what efforts they made for the patients.

This change sounds quite innovative. Have you received any industry response on the changes that will be made in the Korean market next year?

The responses that I’ve received is that [we are] very brave. But at the same time, they note that it is the right way to go, and that some day, all players in the industry should be heading the same direction. What comes to my mind is that for a long time, people in the pharmaceutical industry have been well adjusted to customs and behaviors that made it difficult to breakthrough. If we think this is fundamentally the right direction to go, then we should move in that direction.

Kim Jin-ho, general manager of GSK Korea, talks to his employees at a town hall meeting on North Asia commercial strategy; Kim poses with GSK employees at a company event to donate kimchi to students the company sponsors as part of its corporate social responsibility program; Kim, left, talks with then commander of the first fleet with which GSK Korea has established close relationship to promote a healthy lifestyle among officers.Provided by the company


What do you think makes a leader competent?

Since last year, you’ve also held the role of chairman of the Korean Research-based Pharmaceutical Industry Association. Have there been any accomplishments?

The principle role of the association is to act as a partner to the government by providing support and information in the process of establishing various policies.

In recent years, the government has been lending an ear to our voices and we have been providing adequate advice to them to develop the country’s pharmaceutical industry. Last year, for the first time as KRPIA chairman, I was selected as a presidential economic delegation to Europe from November 4 to 8. 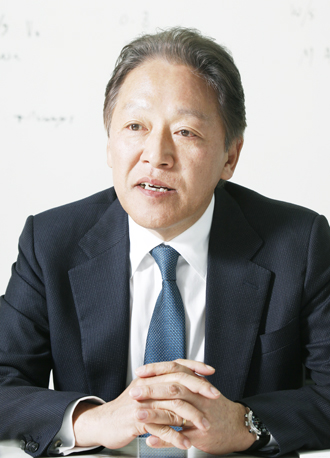