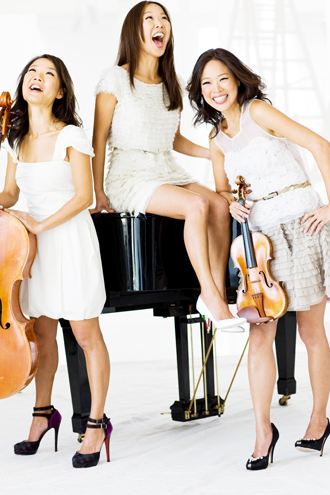 When people think of classical trios, they usually think of quiet chamber music, probably in an uptight atmosphere. But for Ahn Trio, Korean fans can only guess what their stage is going to be like. The trio, composed of three sisters - Angella Ahn on violin, Lucia Ahn on piano and Maria Ahn on cello - is known for genre-crossing performances and collaborating with modern artists like alternative rock band Tata Bojs and Bryan Adams.

For Ahn Trio’s concert in Seoul on May 18, their first here in seven years, the sisters are, once again, trying something new. This time, though, it isn’t a collaboration with musicians, but with B-boys. Ha Hui-dong, a popular street dancer who is familiar to Koreans from the dance audition program “Dancing 9,” will be joining Ahn Trio, together with B-boy crew Visual Shock.

Referred to as the “whiz kids,” by Time magazine, the Ahn sisters were born in Seoul but moved to New York in 1981 and studied at the Juilliard School. Lucia and Maria are twins. They have released six albums since 1995 and are active throughout the United States.

For the Seoul concert, the trio says they will perform “Swing Shift for Piano Trio” by Kenji Bunch, which was written for Ahn Trio, as well as a selection of rock hits, like Prince’s “Purple Rain” and David Bowie’s “Space Oddity.”

Prior to their show, the Korea JoongAng Daily interviewed Ahn Trio via email. Here are excerpts from the interview. (Note: Sometimes they answered collectively and sometimes individually).

Q. It’s your first visit in seven years. How do you feel about coming back?

A. Trio: We are very excited to play in Korea again. We have missed our Korean fans. It will be really fun to share our music again and see and experience all that’s changed since our last visit. We can’t wait to eat Korean food in Korea, especially our childhood favorites like jjajangmyeon (noodles in black bean sauce), and sundae (blood sausage) from our favorite street vendor in Myeong-dong. We love the energy and liveliness of Seoul. It makes NYC seem calm.

What can Korean fans expect to see at your coming concert? Do you have any “Korean” songs prepared for Korean audience?

Maria: We hope our fans will like what we’re bringing to share. We will play our audience’s favorite pieces. We feel badly that we don’t have a Korean song. We would like to play a Korean song but don’t know any. It will be great if our Korean fans can send us Korean songs to our trio Facebook page (www.facebook.com/ahntrio). We really do want to learn more about popular Korean songs.

Trio: Ever since we saw the documentary film, “Planet B-Boy,” we were interested in collaborating with Korean B-boy dancers because we heard the Koreans are the best B-boy dancers in the world. We hope to have as much energy and excitement as the dancers on stage. The stage might explode with too much energy as we do this piece together. It will be our first time collaborating with such dancers, so we are as excited as our fans about it.

Ahn Trio is especially known for crossing genres and collaborating with other artists. Is this an effort to promote classical music?

Angella: Good music is good music. What we find interesting is in the beginning of our careers there was a lot of talk regarding “traditional” versus “crossover” music. Now we find that the line between these two is blurring. It seems the successful musicians everywhere are the ones that are doing what they love and what is unique for them.

Maria: Also, Angella often plays traditional classical music with her colleagues at Montana State University where she is a violin and viola professor.

How do you define Ahn Trio in your own words?

Trio: We are a Korean-American piano trio playing modern classical music mostly written for us by living composers. We love to collaborate with brilliant peers of various genres. We don’t like being put in a box but thrive on trying new things and exploring musical possibilities. In a way, we are musical mavericks.