Obama has strong words for regime

Obama has strong words for regime 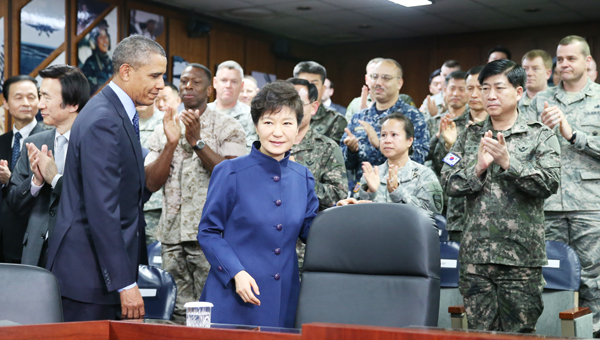 U.S. President Barack Obama sent a strong message to North Korea on Saturday during his state visit to Seoul, following reports by the South Korean government that the regime is planning a fourth nuclear weapons test.

On the final day of his two-day stopover in the capital city, Obama visited Yongsan Garrison and stressed united cooperation between the allies and America’s readiness against any possible military provocation by Pyongyang.

“North Korea’s continued pursuit of nuclear weapons is a path that leads only to more isolation,” he said. “Anybody can make threats. Anyone can move an army. Anyone can show off a missile. That doesn’t make you strong.”

Obama underscored the “rock-solid” alliance between the two countries in his speech.

“Our alliance does not waver with each bout of their attention-seeking,” he said. “It just gains the support of the rest of the world.”

During his speech, the U.S. president was met with loud applause from Korean guests after stating in Korean, “Ga-chi-gap-si-da,” which means, “We go together.” It is also the official motto of U.S. Forces Korea.

Before his visit to the garrison, Obama paid a visit with South Korean President Park Geun-hye on Saturday morning to the Combined Forces Command in Yongsan. It was the first time the two leaders have visited the command center together since it was established in 1978.

Amid growing concerns about a fourth North Korean nuclear test, Park acknowledged in her speech that the joint visit to the command was “meaningful” and asked the command to stay vigilant against any provocations from Pyongyang.

In her speech, she also said in English, “We go together.”

Their emphasis on military cooperation against Pyongyang came a day after they agreed Friday to delay South Korea’s takeover of wartime operational control, currently scheduled for 2015.

On Friday, Obama offered an American flag and a magnolia tree to the victims of the deadly sinking of the Sewol ferry after a moment of silence before the summit with Park.

He said he was presenting the tree to the students of Danwon High School, who made up the majority of the passengers onboard the ferry.