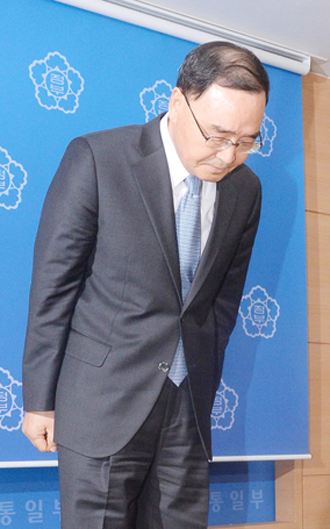 President Park Geun-hye has approved the resignation of Prime Minister Chung Hong-won, the Blue House confirmed yesterday. Chung tendered his resignation Sunday amid national outrage over the government’s slow response to the fatal capsizing of the Sewol passenger ferry, which has left hundreds dead or missing.

Chung said he would take all of the responsibility for the government’s poor and slow handling of the disaster, which has so far claimed nearly 190 lives and left more than 110 people missing.

Min Kyung-wook, a Blue House spokesman, added that the prime minister’s exit will be allowed once the accident has been fully dealt with.

“The president said wrapping up the accident and the rescue work is the most urgent job, so it would be right to accept his resignation after everything settles down,” he added at a briefing.

The prime minister expressed his motivations yesterday at an emergency press conference.

“Countless schoolchildren lost their lives and so many others were sacrificed in the unimaginable sinking of the Sewol ferry,” Chung said. “This accident has left the public in great shock and sorrow, and the screams of the families of the missing still keep me up at night despite the fact that it has been more than 10 days since the accident.

“On behalf of the government, I apologize to the people for failing to deal with a number of these problems at the time, from taking preventive measures [before the accident] to the government’s initial handling of the accident, as well as the recovery efforts afterward,” Chung continued. “I thought it would be right for me to take all of the responsibility as the representative of the cabinet and as a way to apologize to you.”

The government came under fire directly following the incident for its poor response to one of the country’s worst maritime disasters.

The doomed Sewol ferry was carrying 476 passengers on April 16 from Incheon to Jeju Island when it suddenly capsized in waters off Korea’s southwestern coast. Families of the passengers have criticized the government for being too slow in carrying out rescue work before the ferry completely capsized as well as its subsequent efforts to locate bodies from the vessel.

“I tried to step down earlier, but I thought it would be most responsible to see the accident to its conclusion and make sure preventive measures are implemented,” he said.

The prime minister left the press meeting without answering questions from reporters.

The news came as no surprise to the ruling Saenuri Party, who said that the prime minister’s resignation had been expected.

“The prime minister’s resignation was an expected scenario,” a Saenuri Party lawmaker told the JoongAng Ilbo yesterday. “Now the most important thing is wrapping up the accident and doing all we can in the matter.”

Kim Jae-won, another lawmaker for the ruling party, said Chung’s decision was the right one at the right time. “Because other ministers are working on the ferry’s recovery efforts, the prime minister decided to step down to take responsibility for the case first.”

However, the New Political Alliance for Democracy (NPAD) called the premier’s exit “cowardly,” particularly amid the ongoing search for passengers still missing aboard the ferry. Since the ship’s capsizing, the main opposition has refrained from politicizing the government’s handling of the accident.

“The prime minister, who is the head of the cabinet, announced that he alone would step down,” Ahn Cheol-soo, co-chairman of the NPAD, said at a press meeting held an hour after Chung’s announcement. “This is an extremely irresponsible attitude to have and a cowardly evasion at this time.”

NPAD Co-Chairman Kim Han-gill took a similar stance as that of his counterpart. “The responsible attitude among politicians would be to cooperate with wrapping up the incident first and then scrutinizing the dangers of our country later,” he said.

Whether she will reshuffle her cabinet amid Chung’s exit remains to be seen.