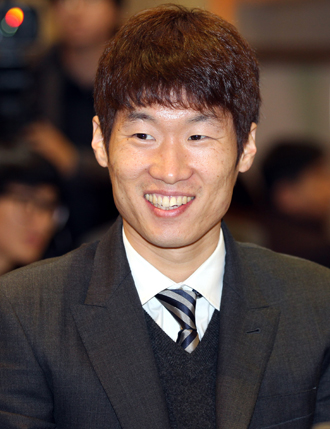 Park Ji-sung of PSV Eindhoven is not going back to the Queens Park Rangers (QPR), Park Sung-jong, father of the 32-year-old midfielder, said yesterday.

Park was loaned to PSV from QPR before the season began and as the loan contract expires after this season, he should go back to the England club, but Park’s father told the Ilgan Sports, an affiliate of the Korea JoongAng Daily, that his son is not willing to go back to England even if QPR, which is currently in the Championship League, advances to the English Premier League next season. The father said Park will ask QPR to extend his loan contract with PSV for one more season. If QPR doesn’t agree to the extension, Park will likely retire, his father said.

“Nothing has been decided yet, but Ji-sung doesn’t want to go back to QPR for sure,” the father said. “He wants to retire after he plays one more season with PSV. He will meet with Tony Fernandes, the owner of QPR to discuss extending his loan contract with PSV.”

The father explained that Park doesn’t want to play in England, which would mean more matches than he plays in the Netherlands and a physically demanding style. Park wants to wrap up his career healthy.

“It doesn’t matter if QPR advances to the Premier League next season,” the father said. “I think going back to QPR is not the best option considering that Harry Redknapp’s football style is incompatible with my son.”

Under league regulations, the top two clubs automatically advance to the Premier League, and the next four clubs go through a playoff to decide the last spot. QPR finished the season fourth.

The father said Park will fly to London after PSV’s last game May 3. PSV is currently fourth in the league and a loss in the final match would force the club to compete in a playoff to win a spot in the Europa League.

“My son already has arranged a schedule to meet with the QPR owner,” the father said. “The meeting with the owner will likely determine Ji-Sung’s future for sure, because QPR has all the rights for the loan extension, but since he doesn’t want to ruin his good relationship with Fernandes, he decided to meet with him to explain his ideas clearly.”

Park’s father added that his son’s right knee, which many Dutch media outlets described as a time bomb that could detonate anytime, is fine to play one more season.

“If PSV manages his training and game time a bit more flexibly, there will be no problems for him to play one more season,” the father said. “What I know is that the team’s coach, Phillip Cocu, wants to keep Ji-sung for one more season.”