Yes! Noh hangs on to claim his first PGA championship

Yes! Noh hangs on to claim his first PGA championship 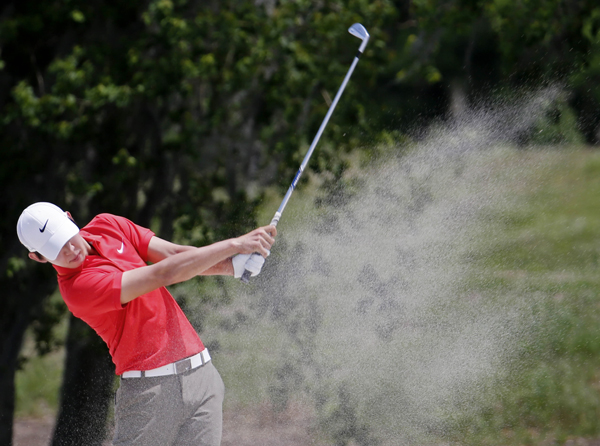 Noh Seung-yul overcame windy conditions and his nerves, shooting a 1-under 71 on Sunday to win the Zurich Classic by two shots for his first PGA Tour victory.

While Noh, the leader through three rounds, never fell out of first, he did make his first three bogeys of the tournament and briefly fell into a tie with Keegan Bradley, the 2011 PGA Championship winner.

But Bradley did himself in with a bogey on the fifth hole and a triple bogey on the sixth, while Noh remained steady enough to hold off remaining challengers.

The 22-year-old South Korean, the youngest winner this season, also knew he achieved another goal of providing some joy to a nation that has been reeling since a passenger ship capsized April 16, leaving 300 missing or dead.

“Hopefully, they’ll be happy,’’ said Noh, who wore black and yellow ribbons on his white golf hat to honor victims of the ferry accident.

After taking the third-round lead and becoming the first to play 54 holes at TPC Louisiana without a bogey, he said he hoped he could string together one more bogey-free round and come through with a victory to lift the spirits of his nation. 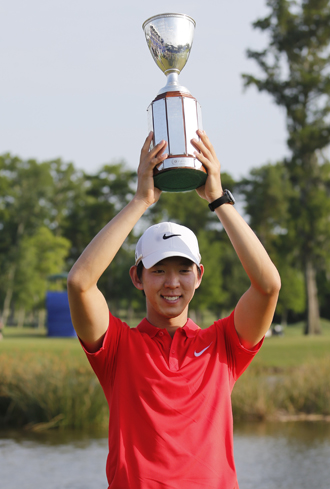 Noh Seung-yul, of South Korea, holds up his trophy after winning the Zurich Classic on Sunday at TPC Louisiana. It was his first PGA title. [AP/NEWSIS]

He accomplished the second part, and he’ll take it. His best finish in 77 previous PGA Tour starts was a tie for fourth at the 2012 AT&T National.

Andrew Svoboda and Robert Streb tied for second. Svoboda had a 69, and Streb shot 70.

Jeff Overton, who briefly pulled within a stroke of Noh on the back nine, had a 70 to finish fourth at 16 under.

Bradley would up with a 75 to tie for eighth at 13 under.

After Saturday’s third round, Bradley had worked his way into the final group, two strokes behind Noh, with a 65.

Bradley was within a stroke after the first hole Sunday, which saw Noh hit his drive into mulch right of the fairway en route to his first bogey of the tournament. Bradley then birdied the par-5 second hole to tie Noh, to the delight of the gallery.

But just a couple holes later, Bradley missed a par putt from less than 2 feet, and followed that up by hitting his drive into the water on No. 6. Because of where his ball crossed the line of the elongated hazard, he had to take his drop 280 yards from the pin. Then, he three-putted to complete a pivotal two-hole stretch in which he dropped four strokes.

While Bradley never recovered from his front-nine falter, Noh still had to ward off a challenge from Overton, who was as close as one stroke after making a 20-foot birdie putt on 10.

Overton, however, bogeyed 11 when he hit his drive into a bunker left of the fairway and his second shot over the fairway and right of the cart path. He never got closer than two strokes again.

Noh needed a few tight shots on the back nine, including a chip out of a grassy downhill lie on the edge of a bunker on 13, which hit the flag on a bounce, setting up a routine birdie putt.

On 16, with wind in his face, Noh landed his approach 3 feet from the hole to set up his last birdie, then made a 14-foot par putt on 17 to assure a two-shot cushion on the final hole, uncharacteristically pumping his first afterward.

“Yeah, that was a clutch putt,’’ Noh said, explaining that it left him “very comfortable’’ on 18.