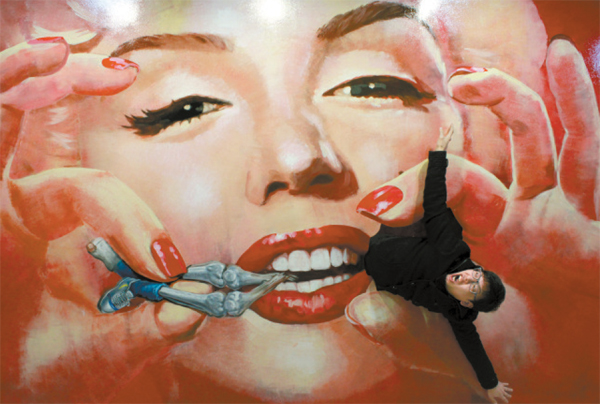 A visitor to the latest Alive Museum in Insa-dong, central Seoul, poses in the artwork titled “Marilyn Monroe’s Feast.” Provided by Creative Tong

On top of Korean crafts, antiques and teahouses, Insa-dong has gotten a new draw for tourists: trick art. The area now has not just one trick art museum, but two.

The latest Alive Museum is located just a few blocks south of the Ssamzigil one, and it is larger in size.

The museum is dedicated to trick art, which uses trompe l’oeil techniques to deceive the viewers. Optical illusion museums have been gaining popularity in Korea. There are now eight such museums in Korea operated by Creative Tong, with locations in Paju, Seoul Tower, Yeosu, Daecheon and on Jeju Island. There are six outside of Korea in Turkey, China, Thailand and Vietnam. One will also open in Singapore in June.

The biggest charm of trick art is that visitors can put themselves into the artworks, or, as the organizers put it, complete them.

“Unlike other museums, the Alive Museum allowed me interact with artworks, have fun and laugh,” Michelle Maeng, a 33-year-old Seoul resident, said after visiting the museum. “And I think it’s something new to the rather traditional scene of Insa-dong.”

An important part of the process is capturing the illusion with a photo from a smartphone, which is why the trick art museums have become a popular destination for dates.