The hide-and-seek of claiming lost artifacts

The hide-and-seek of claiming lost artifacts 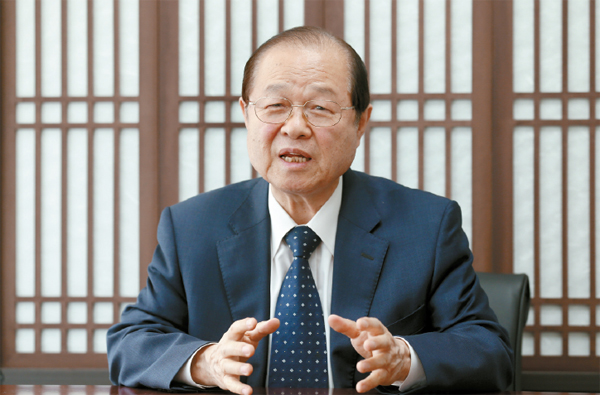 Chairman Ahn Hwi-joon of the Overseas Korean Cultural Heritage Foundation notes it is not always favorable to reclaim cultural assets from overseas museums or galleries. By Kim Sung-ryong

U.S. President Barack Obama’s fourth visit to Korea last week disappointed some people because of his short stay. But the trip was heavier on Korean culture than previous ones, and it included a guided tour of Gyeongbok Palace. Obama was the first sitting U.S. president to visit the palace.

The bigger cultural significance is that Obama brought with him nine Korean seals that have been missing since the 1950-53 Korean War. The seals, stamps used to authorize documents in lieu of signatures, are from the Joseon Dynasty (1392-1910) and the Korean Empire (1897-1910).

People wondered if this could be the first step for Korea toward reclaiming thousands of artifacts in North America that have been taken out of the country over the centuries.

With public attention toward missing cultural artifacts rising, the JoongAng Ilbo sat down with Ahn Hwi-joon, chairman of the foundation, in early April.

“I do not agree with the idea of reclaiming every single artifact of Korea,” Ahn said to the reporters’ surprise. 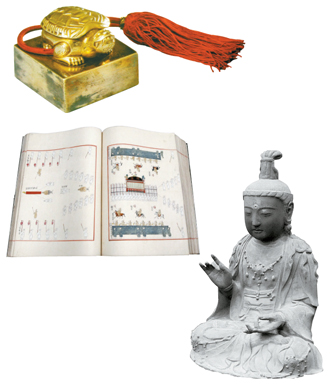 From top: A royal seal from the Korean Empire (1897-1910). The Overseas Korean Cultural Heritage Foundation bought it from a Korean-American in 2008; The volume depicts the state funeral of Queen Jangryeol in 17th-century Joseon era. The book was one of the cultural assets returned from France in 2011; Geumdong Gwaneum Bosal, a Bodhisattva statue from Buseok Temple, sparked controversy between Korea and Japan last year. [JoongAng Ilbo]

Q. Are you saying you are not in favor of reclaiming lost cultural artifacts overseas?

A. What I’m saying is that the cultural-artifacts issue is not a simple one. Before discussing the grand plan of the retrieval, we need to think about how Korea’s cultural heritage is represented in the major museums around the world. Compared to Chinese or Japanese artworks, museums have stunningly few Korean works, so it’s not easy for the local people to get exposed to Korean culture. After noticing that issue, I’ve come to realize that retrieving every lost work is not the panacea one would think at first. It might be better to leave those Korean artifacts there.

Moreover, we need to think about the legal problem. If the works were taken legally, it’s hard to get them back because laws were not violated, technically speaking. The archives of Oegyujanggak, or the royal library of King Jeongjo in the late Joseon Dynasty, are a good example. The books were looted during the French invasion of Ganghwa Island in 1866, as is well known. Though the books were taken illegally, it was still hard to negotiate with the French government. That’s why I think it’s time for us to consider some realistic options for the lost artifacts.

Then what kinds of artifacts should still be reclaimed?

If the artworks are as valuable as a national treasure, we should definitely get those back. We are also focusing on taking back artifacts with high academic value.

Can you tell us how many artifacts have been taken out of the country?

We estimate about 156,000 cultural artifacts have been removed from Korea. While some were taken illegally, the majority of the items were taken without breaching any law. The foundation has completed studies on about 33,800 items, but we still have a long way to go. The Annals of the Joseon Dynasty records that a striking number of artifacts were stolen by outsiders. But tracking them down in China is a tough job.

What’s your principle in reclaiming the artifacts?

Respecting the law. Any kind of illegally held artifact is simply intolerable, no matter what country you’re talking about. I was quite disappointed over the Buseok Temple conflict last year and the smuggled Bodhisattva statue. Although the Japanese government urged Korea to follow international law, the Daejeon District Court ruled in favor of Buseok Temple, imposing a temporary injunction against the transfer of the statues. We all know that the Japanese pirates stole the statue in the 14th century, but that doesn’t mean that the Korean government can claim any right automatically in the 21st century. There is a procedure to follow.

After that, Japanese scholars turned anti-Korean. Now they hesitate to attend academic meetings with us. Thanks to the decision of the Daejeon court, Korea lost its upper hand in any future negotiations.

What might have led the court to rule that way?

It certainly had to do with nationalism. One thing Koreans have to remember is that everything has proper procedures.

How far has your project come so far?

Retrieving cultural assets cannot be done in a day. Based on the current budget and resources, the foundation can investigate about 6,000 items worldwide. According to this calculation, we will have to spend more than 20 years to study all assets. After decades of experience, I learned that bringing back cultural assets is like a game of hide-and-seek. Once you make too much noise, you won’t get any chance to win. Everything must be done quietly, creatively and sincerely.