Young start to buy their artworks on the Internet

Young start to buy their artworks on the Internet 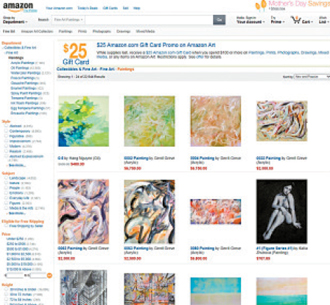 LONDON - The value of the online fine art market is expected to more than double to $3.76 billion in the next five years as it increasingly attracts younger and first-time buyers, British insurer Hiscox said yesterday.

But the willingness of younger buyers to make their first purchases over the Internet along with the rapid growth of online sites pointed to the future of the sector, it said in a statement.

“Young collectors are looking for art work which is easy to buy and available at a wide range of prices,” Robert Read, Hiscox’s head of fine art, was quoted as saying.

“Online art platforms cater for all tastes and budgets, but are particularly effective for those just starting to collect - opening up the art market in a way that is hard to replicate in the real world.”

In its second annual report on the online art market, in conjunction with market research company ArtTactic, Hiscox projects this figure will grow to $3.76 billion in 2018.

“Based on these figures, online art buying accounts for 2.4 percent of the estimated value of the global art market, which in 2013 was $65 billion,” Hiscox said.

Internet retail giant Amazon had launched its Art portal in the past year and online auction house eBay was reportedly planning a rival platform, it said.

“Significant increased investment into platforms like Paddle8, Artsy and Artspace indicates continued confidence from investors and belief in the long-term potential of these businesses,” Hiscox said.

Online-only sales would not replace galleries, auctions and other traditional sales channels, it said, but provide an alternative buying opportunity and additional revenue stream.

“The findings indicate that online art e-commerce will not exist as a separate entity - it will augment and co-exist with what is happening in the real, physical art world,” Hiscox said.

The report did find, however, that future generations of collectors were likely to make their first art purchases online, with almost 25 percent of 20- to 30-year-olds surveyed for the report saying they first bought art online without seeing the physical piece.

Although 39 percent of respondents said buying art online was less intimidating than at a gallery or auction, having a brick-and-mortar presence instilled confidence, with 90 percent of online buyers purchasing from a physical space before turning to websites.

Limited-edition prints were a popular entry point for online buyers, the report said, with 55 percent of those surveyed having bought a print online in the last 12 months.

Nevertheless, seeing the physical object remained important, with 82 percent of those surveyed saying the most difficult aspect of buying art online was not being able to inspect it.