A difficult conversation in Korea

A difficult conversation in Korea 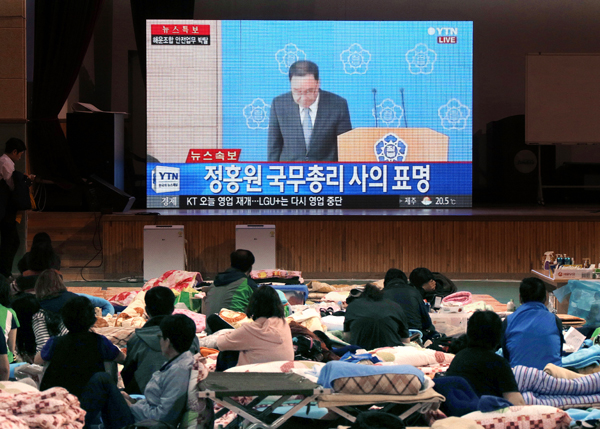 Families of the victims from the Sewol Ferry tragedy watch Prime Minister Chung Hong-won announce his resignation on Sunday after taking responsibility for the government’s inept response to the disaster. [JoongAng Ilbo]

To many Koreans, Chung Hong-won has done exactly one thing right since the tragic sinking of the ferry Sewol cost hundreds of passengers, most of them high-schoolers, their lives. On Sunday morning, South Korea’s prime minister - the No. 2 official in the government - resigned.

Ignore the histrionics from opposition lawmakers, who immediately demanded that Chung remain at his post and see through the recovery effort, which has been hampered by bad weather and strong currents. The government’s initially shaky response to the April 16 ferry sinking had made Chung’s position untenable. Beyond the weather, rescue efforts were initially slow and confused. Most unforgivable of all, authorities at first claimed most everyone on board had been rescued, giving false hope to hundreds of now-grieving parents. That first day, Chung was the face of President Park Geun-hye’s government, and enraged families of victims screamed and hurled water bottles at him. By this point Chung is damaged goods. Park had little choice but to accept his resignation.

Executive power in South Korea is concentrated in the presidency, so in some ways the resignation is largely symbolic. What’s more important is how Park responds in the days and weeks ahead. It’s too crass to call Chung’s departure a fresh start, particularly with more than 100 passengers of the Sewol ferry still missing. But as Choi Chang-ryul of Seoul’s Yongin University told Bloomberg News, this “can be positive if the government does well and the president shows sincerity after accepting his resignation.”

If Park acts boldly and transparently to investigate the many failures that led to this tragedy, her administration can still recover, and Korea’s loss of face globally will be fleeting. Prosecutors are clearly determined to hold the ship’s crew and owners to account. Park, though, needs to confront more systemic problems as well. Regulators in Korea are too cozy with industry, and abuses have long been rampant. Park must sever those ties cleanly, close the revolving door of officials moving between ministries and regulatory bodies, and create a more internationalized corporate code.

The president must also open up a difficult discussion about Korean culture. When one considers the chain of events that precipitated this Made-in-Korea disaster, there’s ample reason to worry about Koreans’ legendarily reflexive obedience to authority. It’s this kind of groupism, one can argue, that had ferry staffers thinking nothing of putting too much cargo on board; underlings negotiating a risky turn themselves rather than ask the captain to return to the bridge; passengers following orders that they stay below deck even as the boat sank. Look, I wasn’t there and hindsight is 20/20. But it’s at least fair to ask whether cultural norms contributed to this tragedy. And it’s Park’s responsibility to guide that conversation.

Koreans are resilient. They recovered powerfully from war in the 1950s, and then from the 1997 Asian financial crisis. They long ago beat the dreaded middle-income trap that ensnares most developing nations. They are rightfully proud of their technological savvy - the world’s fastest Internet connections, gadgets that have Japan’s once-proud Sony looking to become a real-estate company, you name it. Just since 1997 they’ve weathered myriad political and corporate scandals, the suicide of a former president, Roh Moo-hyun, who leaped to his death from a mountaintop, and any number of provocations from North Korea.

For good reason, the Sewol tragedy has come as a huge shock to Koreans’ sense of themselves as members of an advanced nation. But with focus and determination, they can rebound from this crisis as well. Frankly, I wonder if Koreans are being a bit too hard on Park’s government. More attention, I would argue, should be focused on the days when her father, dictator Park Chung Hee, helped create the system of family-run conglomerates, or chaebol. They have long gotten away with riding roughshod over regulations because they pumped up economic growth. The chaebol set the tone for today’s Korea Inc.

I’m not saying the needed changes - to make sure that regulatory controls keep pace with the nation’s economic and technological successes, to reform a corporate culture that prizes blind obedience to authority - will not be difficult. But Koreans have proven that they know how to confront and fix problems in their society and economy. They can do so again.