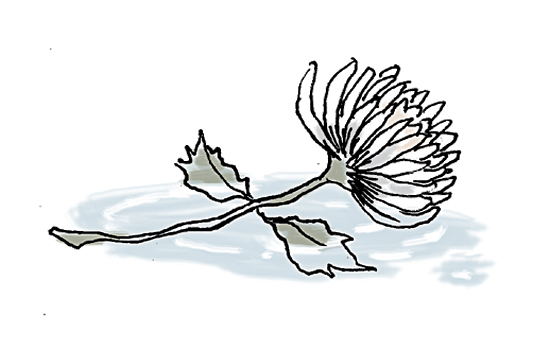 Petals fall in the wind, their short lives brutally truncated before they even fully bloom. The lives of hundreds of 11th-graders vanish into the murky and frigid waters in a terrible instant of tragedy as sudden as spring petals blown by a wind on a cold black night. We need not borrow T.S. Eliot’s memorable and often-quoted words to resent April for being the cruelest month. It was also an April in 1960 that claimed the lives of young souls protesting authoritarianism and state violence.

The deadly collapse of the Wawoo Apartment in April 1970 killed 34. A gas blast in April 1995 at a subway construction site in Daegu cost 101 lives. Shoddy construction procedures amid little to no safety awareness as well as poor legal and administrative systems caused the deadly accidents. In those days, we were an underdeveloped country in so many ways: politics, democracy, the economy and society.

But what excuse can we use now for the bigger human disaster that took place on April 16, 2014? On that day, the Sewol ferry carrying 476 passengers - with more than 300 light-hearted high school students on a school trip to Jeju Island - took a sudden turn while passing through a channel of rocky islands with an inexperienced sailor on the bridge. The captain - who happened to be a substitute - rested in his cabin when the ship started to tip over, the passengers were ordered to stay put through loudspeakers. Meanwhile, the captain and most of the crew sneaked out through the staff-only stairs to be the first to arrive on deck and jump into rescue boats.

While the captain was safely arriving on shore, 22-year-old part-time crew member Park Ji-young was running around helping students with their life jackets.

“Why don’t you wear one, too?” a student asked.

Park, a college student, was working part time to raise money for her tuition. She had no formal training. But she was the only crew member on the ship who acted with chivalry and according to the code of ethics.

South Korea’s economic prowess and high-tech pride were not exactly on display at the site of the maritime disaster. Students who saluted the Korean flag and sang the national anthem throughout their school days had every reason to believe that their country would come to save them as they waited below deck, as instructed, wearing life jackets. Instead, no one came, and the cold waters of the sea swallowed them.

Talk about failing to go beyond symbols. Safety doesn’t come from name changes. It requires training about responsibilities and the establishment of safety systems and exercises. Have we done enough? How many times have we heard vain promises that such tragic accidents will never recur?

How many more have to be sent to prison or sacked from their jobs before we actually can believe such promises? What does it really accomplish when someone steps down from a job to “claim responsibility” for a tragedy? Actually, the person is losing his job because he or she was irresponsible.

The symbols-only approach contrasts with the self-sacrifice by a 6-year-old boy who went missing after giving up his life jacket to his younger sister; the students who willingly passed along life jackets to their friends before they found ones for themselves; the first-year teacher who tried to save her students before she was drowned herself; the teacher who held onto the edge to deliver life vests to his students until the last moment; and the many divers - military as well as civilians - who risked their lives to go deep into the sea to search for survivors, or even just corpses, in the murky darkness. How does that compare to the sight of bureaucrats and politicians eating ramen or taking selfies amid the chaos? What about the botched command system at the disaster and salvage campaign headquarters, the slow arrival of equipment, and a rigid bureaucratic operation that left out private experts, which all resulted in no one being saved after the ferry capsized?

Who can call this country advanced when it cannot even deal with one sinking ship? We cannot imagine what would happen if we experience a terrorist attack. Without revolutionizing and rearming the society with a strong sense of responsibility, we will never become a developed society. We no longer can rely on politicians who forever wrangle among themselves and bureaucrats who are only preoccupied with keeping their jobs and perks. When the corporate, industrial, health care, community and religious sector upgrade their safety infrastructures and responsiveness, the public sector may one day catch up.

April is the cruelest month, and yet a month of rebirth. We will remember the last words from that part-time crew member who died at sea doing her job: The crew goes last. If only it were so.