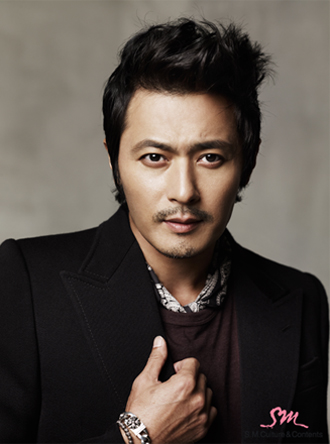 Iconic actor Jang Dong-gun has teamed up with director Lee Jeong-beom for the tentatively titled upcoming thriller “The Crying Man.” Lee, who wrote and directed the 2010 crime thriller “The Man from Nowhere,” will once again tell a story from a killer’s point of view.

The film follows a professional assassin called Gon, a dejected and desperate man who is torn between his duty and his moral standing.

The teaser revealed yesterday features Jang holding a pistol while shutting his eyes.

The general tone of the photograph is easily reminiscent of the famous scene in “The Man from Nowhere” when Won Bin shaves his hair in front of a shattered glass mirror and braces himself for a bloody revenge. To get in shape for his character, Jang went through physical training for five months and combat training in the United States.

After the 2011 film “My Way,” in which he collaborated with director Kang Je-gyu of “Taegukgi: Brotherhood Of War,” the 42-year-old actor took a small break from the Korean film industry. In 2012, he starred in the romantic-comedy drama “A Gentleman’s Dignity” and took part in the Korean-Chinese project film “Dangerous Liaisons.”

“The Crying Man” will also star actress Kim Min-hee of “Helpless” (2012) and is slated to hit theaters in June.