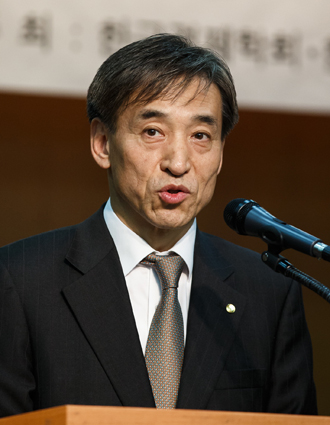 Amid increasing calls for the central bank to raise its benchmark interest rate in response to the ongoing U.S. Fed tapering of quantitative easing, Japan’s expansionary Abenomics and China’s moves to adjust its policy to tackle shady finance, analysts say the Bank of Korea’s new chief needs to make thorough preparations before doing so.

At a seminar held by the Korea Institute of Finance (KIF) and the Korean Economic Association (KEA) in central Seoul yesterday, analysts agreed on the need for a change in the country’s monetary policy, but remained indecisive about whether the BOK should raise the benchmark interest rate.

Most analysts from KIF and major universities believe the central bank will raise its key rate at the end of the year or early next year.

“Since the GDP gap percentage has been below zero until recently, it is not the right time to increase the rate,” said Oh Jeong-geun, an analyst at the Korea Economic Research Institute (KERI). “It will be opportune for the government to raise it about six months before the GDP gap reaches 1 percent.”

The researcher emphasized it would happen in early 2015.

“Along with the U.S. Fed tapering and possible rate hikes, the Korean central bank also is likely to raise its rate within the term of the new chief,” said Park Jong-kyu, a researcher at KIF. “However, the Korean economy still has bubbles in household debt and real estate, which make chances of normalization of the key rate lower than those of the United States and European countries.”

Park argued that the central bank should make thorough preparations before it raises the rate.

“The BOK shouldn’t be obsessed with its inflation target in boosting the economy,” he added.

Kim Chang-bae, a KERI researcher, said that rather than the timing of when the BOK raises the rate, it is important that the central bank explain clearly to the market why it wants to do so.

BOK Governor Lee Ju-yeol didn’t mention the possibility of the much-expected rate hikes in his congratulatory speech at the seminar, but said changes in the global economy and risks are likely to affect the Korean economy in a negative manner.

“The national economy has been accumulating imbalances in many sectors, which can lead to a serious problem,” Lee said. “Excessive reliance on exports will not only increase susceptibility to overseas economic changes and volatilities in the domestic economy, but also undermine a virtuous cycle between growth and employment.”