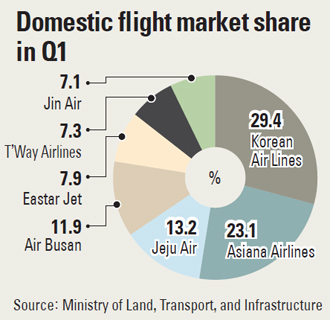 Can budget airlines spread their wings and gobble up 50 percent of the market for domestic flights in the second quarter of 2014? Data from the Ministry of Land, Infrastructure and Transport shows that the market share held by low-cost carriers, or LCCs, on domestic flights reached 47.5 percent in the first quarter of this year, growing only 0.2 percentage points year-on-year.

In the first three months of 2014, the five local budget airlines flew 2.53 million passengers domestically, up 14.3 percent from a year earlier.

By airline, KAL had a 29.4 percent market share followed by Asiana’s 23.1 percent. Jeju Air had the best market share among local LCCs with 13.2 percent, while Jin Air was flying the lowest with 7.2 percent.

The two full-service carriers have been trying to combat the rise of LCCs in short-haul flights. While KAL has been emphasizing its premium service and brand image, Asiana has borrowed strategies from budget carriers, introducing an “early bird” system of discounts for early booking and promoting online ticket sales.

“It seems that existing airlines’ pricing strategies have paid off to defend the rise of LCCs in the domestic flight market, but this will change as LCCs are competitively increasing their flights and opening new routes,” a spokesman from Jeju Air said.

In contrast, the total number of domestic flights operated by the five LCCs each week have increased from 691 to 821 this year.

Industry insiders said that budget airlines’ starting routes from Daegu International Airport will be the key to their expansion in the second quarter.

T’Way Airlines has been operating a flight between Daegu and Jeju since March 30, while Jeju Air will fly the same route beginning July 3. KAL is reducing its Daegu-Jeju flights from 33 to 28 per week this summer.

Data from the Transport Ministry shows that 109,881 passengers departed from Daegu International Airport in this first quarter on domestic flights, up 10.9 percent from a year ago.

T’Way Airlines said that its Daegu-Jeju route has been successful and its reservation rate is more than 90 percent. The company operates a Boeing 737-800NG four times a week.