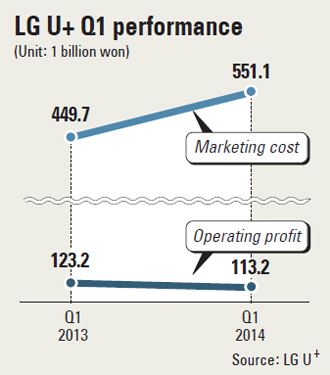 LG U+ said it spent 551.1 billion won on marketing expenses in the first quarter, a 22.6 percent increase from a year earlier and 15.5 percent higher than the previous quarter.

Mobile carriers engaged in a cutthroat competition earlier this year to secure subscribers by offering excessive subsidies on smartphones.

That caused several subsidy wars on Internet portals, such as the “Feb. 28 chaos” and the “March 1 chaos,” when people expected the mobile companies to offer large subsidies.

Excessively large subsidies brought a government crackdown in the form of 45-day business suspensions on the three major mobile carriers.

The business suspension of LG U+ from March 13 through April 4 - the first of the three carriers - was also cited as the primary cause for a 24.4 percent year-on-year decline in sales revenue to 760.3 billion won.

According to the Shinhan Investment Corporation, sales of SK Telecom, the No. 1 player, likely increased 7.5 percent in the first quarter from a year earlier to 4.37 trillion won.

Compensation for damages caused by a technical glitch that shut down its communication network last month along with increased marketing expenses were cited as the major causes of SK Telecom’s worsened operating profit.

For KT, Shinhan Investment predicted its sales will increase 0.2 percent to 6.12 trillion won, but its operating profit will plunge 52.5 percent to 174.4 billion won.

Its net income was expected to nosedive 74.9 percent to 53.3 billion won.

Mobile carriers are attempting to raise their average revenue per user as sales of devices inevitably decrease due to government sanctions and marketing costs soar.

The telecommunications companies have recently shifted their focus to providing benefits to customers who use monthly plans priced 60,000 won and higher.

“With data usage constantly increasing, unlimited LTE data plans are a great temptation for subscribers,” said a spokesman for a mobile carrier. “Mobile carriers can benefit by luring subscribers to high-priced plans so they can increase the average revenue per user. Thus, sales promotions of high-price plans are becoming more important.”