Pioneer Hancom may be back from the dead

Pioneer Hancom may be back from the dead 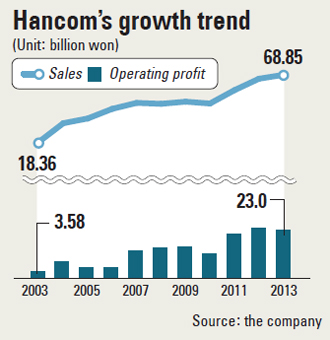 Hancom was once known as Korea’s Microsoft for its pioneering role in the country’s first IT boom in the 1990s. The next decade, however, was nothing short of a disgrace for the word-processing software maker as the company ran out of both cash and ideas and its ownership changed over and over again - at bargain prices.

But Hancom’s future is suddenly looking a lot rosier. It is registering record high performances and is now buying up software companies at home and abroad.

What turned Hancom around?

In one way, the history of Hancom is the history of the development of the Korean software industry. Its signature product, Hangul, the Korean equivalent of Microsoft Word, was developed by Lee Chan-jin, who was nicknamed the “IT Godfather,” and two other members of his Seoul National University computer research club, Kim Taek-jin and Woo Won-sik.

Kim and Woo are now leading NCSoft, one of the country’s largest game developers, with Kim as CEO and Woo as vice president.

Once called Korea’s Bill Gates, Lee Chan-jin led Hancom to set many records. It is considered the first Korean “venture firm,” Konglish for an IT start-up. Hancom was the first IT start-up to be listed on the Kosdaq, the country’s second stock market, and the first software developer to post 10 billion won ($9.7 million) in sales.

But Lee left Hancom in 1999 after the company started spiralling downward, mainly due to rampant illegal piracy of its word-processing program. Many customers supported it because it was a Korean company going head-to-head with giant Microsoft, but it couldn’t survive on nationalism alone and was sold eight times in 11 years. Executives were caught for embezzlement or breach of trust. Kosdaq considered delisting the company.

Things started to change after Soft Forum, a security software developer, purchased Hancom for 67 billion won to become its ninth owner in 2010. The new head of the company, Kim Sang-chul, brought the goal of turning the company into a “global all-around software developer.” He took aim at the mobile and cloud sectors, and jumped into overseas markets in partnership with hardware companies.

Kim was particularly quick to seize onto the fast-growing mobile computing market. The company started supplying Hancom Office, its flagship software package, for Samsung Electronics’ tablet PCs in January. Its ThinkFree app, which enables users to use programs without having to download the whole Hancom Office package, had over 200 million users around the world last year.

“We will be reborn as a company attracting the best minds in the software industry,” Kim said.