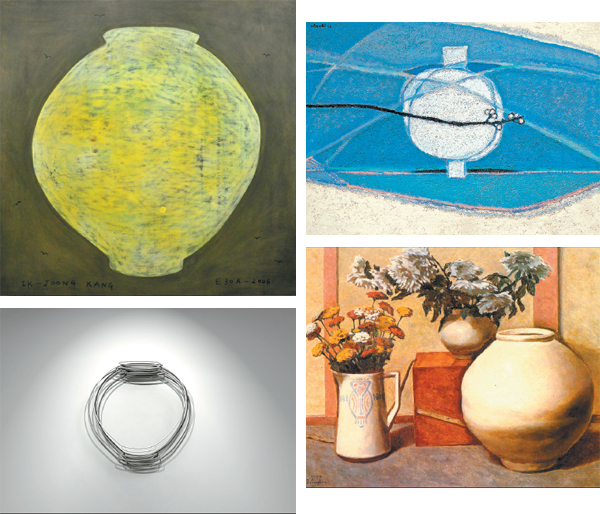 What Korean artifact is loved the most by modern-era and contemporary artists? It could be the moon jar: the white, round porcelain jar that looks like a full moon.

It is well known that Kim Whanki (1913-74), one of Korea’s most important and popular modern artists, collected moon jars and made it a major motif in his half-figurative, half-abstract paintings before converting to pure abstract art.

He is frequently quoted as saying, “When I get blocked during writing, I touch the butt of the big and handsome white porcelain jar beside me, then I suddenly become fluent in writing.”

Kim and other stars of Korean contemporary art such as photographer Koo Bohnchang have made works inspired by the plump ceramic vessels and other white porcelains that originated in the Joseon Dynasty (1392-1910).

They were directly or indirectly influenced by the appreciation of Japanese art critic Muneyoshi Yanagi (1889-1961) of the Joseon-period porcelains, calling them beautiful because of their exquisite plainness.

An exhibition of such artworks, including Kim and Koo’s, is now on display at the Seoul Museum in Buam-dong, central Seoul. The show, titled “Admiration for White Porcelain,” features 56 works by 27 local artists. The show is divided into three sections. Section 1 is for modern-era painters, Section 2 for contemporary painters, sculptors and photographers, and Section 3 for contemporary ceramists.

Section 1 includes still lifes by To Sang-bong (1902-1977) that depict moon jars and other white porcelains with flowers in an academic style.

The most interesting part of this section is a group of white monochrome paintings: pure abstract art inspired by white porcelains.

A yellowish-white work by Chung Chang-sup (1927-2011) titled “Tak No. 84100” could remind viewers of the surface of a white porcelain piece weathered and worn for a very long time. On the other hand, Park Seo-bo’s “Ecriture No. 16-78-81” might be the accumulated fragments of white porcelains that a perfectionist ceramist made but broke during rigorous self-screening.

Among them is Kang Ik-joong’s paintings depicting moon jars in greenish and bluish hues.

The Korean-born, New York-based artist is well known for creating colorful large-scale mosaics made of small, mostly 3-inch pieces. The moon jar is among the common motifs in these mosaics.

The moon jars represent nature, he explained during a solo show in Seoul four years ago.

“I love moon jars, because they are sunsu [a Korean adjective meaning pure or innocent] and dangdang [self-confident or naturally dignified],” Kang told the Korea JoongAng Daily at that time.