No free fall in China

No free fall in China 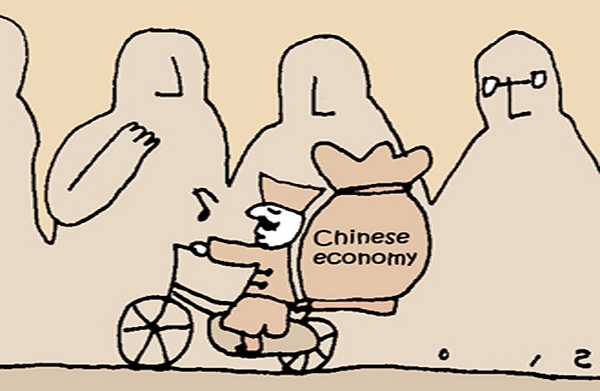 The West is raising hoopla about the impending “China-spurred risk.” Market analysts, economic pundits and the media are ranting about the world’s second-largest economy losing steam after disappointing growth of the country’s first-quarter gross domestic product - a 7.4 percent year-on-year gain - raised concerns that the Chinese economy could underperform the full-year growth target of 7.5 percent and affect economies around the world. Some ominously warn of a crisis from the East on the scale of the Asian currency crisis in 1997.

Arguments for concerns about China’s economy sound convincing. The excessive debt in the nonbanking sector could trigger a credit crisis, burst bubbles in real estate, dampen industrial and export activity, and further slow down the economy. It is true that the unbalanced Chinese economy is stumbling with a heavy load on its back. But if the question is, “Is the country bound to fall sooner or later?” the answer is no. Its load of problems is huge. But the state - with affordability and control over most economic activity - is fully capable of peddling along the current rocky phase. It all depends on the vehicle, driver, speed and road conditions.

First of all, the Chinese economy is running at a relatively solid pace. Even carrying the same cargo weight, a drive in the vehicle feels more stable when running at 30 kilometers (18.6 miles) per hour than at 10 kilometers. At a slower speed, it is easier to lose balance and tip over. The Chinese economy in the first quarter grew 7.4 percent - about three times faster than other major economies. At 7.4 percent, Chinese growth is the lowest in a year and a half. But Beijing is less worried because China’s main policy objective is employment and balanced growth. Prime Minister Li Keqiang said in a recent seminar the government is positive about meeting this year’s growth target of 7.2 percent in order to create 10 million jobs. He added that hiring has been better than expected, with many urban areas short of workers. New jobs are being created through vitality in the services sector. Overall, Beijing has gained confidence in managing the economy and attaining its goal of rebalancing growth that had primarily been fueled by exports and investment through a new focus on domestic demand and private consumption.

The economy’s problems also have been overstated to some extent. China’s unregulated shadow financial sector is said to be equivalent to 70 percent of the country’s GDP. But in America and Europe, the scale hovers around 100 percent to 150 percent. China’s household, corporate and local government debt is estimated to exceed 200 percent of GDP. At the same time, however, China boasts the world’s highest savings rate. When the rate of saving is high, the odds of a financial crisis are low even with a high level of debt. Mortgage loans also do not exceed 50 percent of home value. The rest has been supplied from the homeowner’s own pocket. Therefore, even if home values plunge by half, mortgage loans won’t suddenly go sour.

The real estate business has slowed from the peak years. But China has reason to be less concerned. In March, Beijing announced a new urbanization plan in which it will help more than 200 million people from rural areas move to cities to raise its urban demographic to 60 percent of the population from the current 54 percent by 2020. It will spend more than 1 trillion yuan ($160 billion) a year - or a total of 42 trillion yuan - to fund the civilization’s most ambitious migration and urbanization campaign that could be a windfall to domestic economy.

Beijing also has policy tools and funds to combat any credit crisis from excessive debt. It controls the entire banking sector. If any part runs into liquidity problems, the central bank has the funds to recharge it. If foreign capital flees, it can immediately fill the gap by tapping into its foreign reserve coffers of $3.9 trillion. But since its financial and capital markets remain closed, there is minimal speculation in foreign funds to begin with. The Chinese market is entirely different from those of India and South Korea, which can be shaken by a sudden exodus of foreign capital. Hot funds often travel across emerging markets, making fast money from creating bubbles and killing them. But China has been protective of its market to keep the short speculative funds at bay.

The Chinese economy is in many ways similar to Korea’s during the early and mid-1990s. It is close to attaining per capita income of $10,000, and there is demand for structural reform and financial liberalization. The Kim Young-sam government euphorically opened up the financial market and crowed about joining the ranks of the wealthy and advanced, while failing in structural reform. The fallout was the financial crisis in 1997. Beijing has witnessed Korea’s transitional period and won’t be naive enough to fall into the same trap.

Just because the Chinese risk is not an immediate threat, it does not point to a bull for Chinese equities. Unless structural reforms bear fruit, Chinese enterprises won’t be at ease about investment and business activities. The Chinese market will likely remain on a plateau for some time - without a major bull or bear run. Investors are advised to take the long view.