Arsenal closing in on spot in Champions League

Arsenal closing in on spot in Champions League 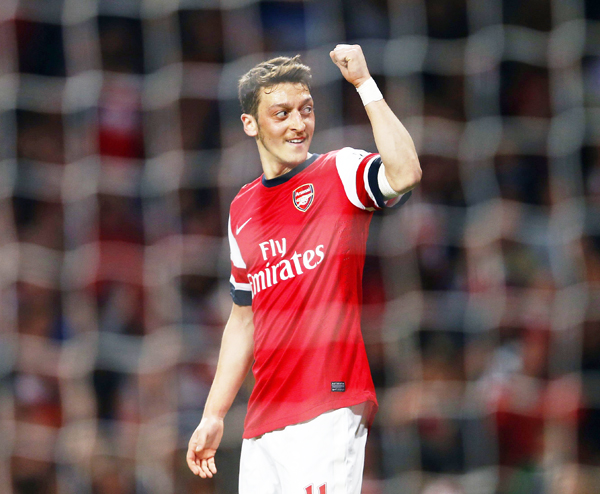 Arsenal’s Mesut Ozil celebrates after scoring against Newcastle during their football match at the Emirates Stadium on Monday. [REUTERS/NEWS1]

Arsenal remains on course for another season in the Champions League after beating Newcastle 3-0 at home on Monday.

The win puts Arsenal four points clear of Everton in fourth place with two games to play in the Premier League, a position that would qualify the club for Europe’s top competition for the 17th straight year.

Having been contained for the first quarter of the match, the hosts found their rhythm after defender Laurent Koscielny gave the Gunners the lead in the 26th minute when he poked in from close range a well-placed free kick from Santi Cazorla. Arsenal forward Lukas Podolski went close to doubling the lead, notably when his powerful header from six-yards out was parried away by Newcastle goalkeeper Tim Krul.

Arsenal went two up in the 42nd minute when midfielder Mesut Ozil tapped in from close range after Krul saved two efforts from Olivier Giroud, the second of which fell comfortably into the path of the Germany international. Ozil then became the provider in the 66th minute when his whipped cross was powerfully headed into the net by Giroud.

The win means that one more victory in the final two games will be enough to confirm a Champions League spot for Arsenal next season. Everton takes on Manchester City at home on Saturday in a game that also has huge implications for the title race between City, Liverpool and Chelsea. Arsenal then plays West Bromwich Albion at home on Sunday.

Arsenal manager Arsene Wenger is taking nothing for granted, though.

“To get over the line is always difficult,’’ he said.

As well as qualifying for the lucrative Champions League, Arsenal is hoping to lift its first trophy in nine years when it takes on Hull in the FA Cup Final on May 17 at Wembley Stadium.

Newcastle chances were few and far though winger Yoan Gouffran had a good chance to halve the deficit early on in the second half but he shot straight at Arsenal goalkeeper Wojciech Szczesny when through on goal.

The defeat was Newcastle’s sixth straight loss and ratcheted up the pressure on manager Alan Pardew. Despite that ignominious run, the club remains in ninth place following a strong first half to the season. The match was also Pardew’s first on the touchline since a seven-game suspension for head-butting Hull’s David Meyler - the longest suspension ever handed down to a Premier League manager.

A section of the 2,000 or so Newcastle fans who made the trip down from the northeast of England turned against Pardew in the second half. “We want Pardew out’’ and “Six in a row’’ boomed down from the away section as they grew increasingly restless.

Pardew conceded the second half of the season has not been good enough and said the fans had the right to vent their frustrations.

“They’ve seen us lose again and they’re not happy and I have to respect that,’’ he said. “We’ve been top 10 all year, this recent run is not something I’m hiding from, we should have performed better in this run and we’ve got to finish in the top 10.’’

In Italy, Juventus all but clinched its third successive Serie A title by coming from behind to win 3-1 Monday at relegation-threatened Sassuolo in heavy rain.

Antonio Conte’s side moved eight points ahead of Roma with three rounds remaining.

The two sides face each other in the penultimate match of the season, but Juventus is expected to seal the title next week when it plays Atalanta at home, where it has won all 17 of its league matches this season.

Juventus also remained on course to become the first Serie A club to reach the 100-point barrier.