Humbling encounter at an altar in Beijing

Humbling encounter at an altar in Beijing 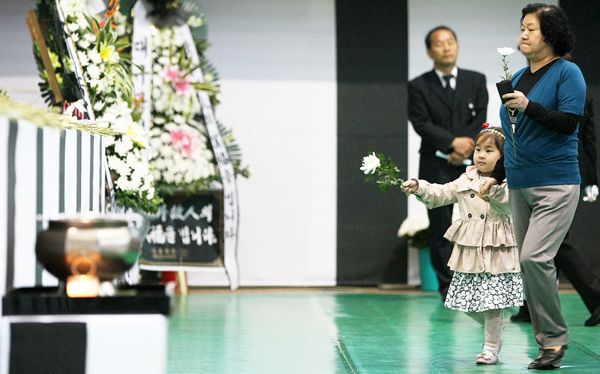 Over the weekend, I visited the memorial altar in the office of the Korean community in Beijing set up to mourn victims of the Sewol ferry disaster that killed hundreds of students. I made the journey with a heavy heart brimming with guilt and shame as an adult citizen of a country that could not protect its youngsters. I was given a yellow ribbon that has become the symbol of mourning and prayer for the victims and their families.

I stood behind a family who bowed their heads in front of the altar. The couple and their teenage son did not raise their head for five minutes. I stopped myself from asking them questions upon seeing their faces. Their eyes were red with tears. I instead laid white chrysanthemums on the altar and paid my respects.

I asked the hostess Lee Sook-soo, the Korean community chairman, if many people had visited the altar. She said there were about 1,000 visitors on Saturday alone. Many came with their children. There were also visitors from Seoul, including former lawmaker Kim Deog-ryong, who was in Beijing for an economic forum.

I approached the former five-term lawmaker and asked if he had visited a memorial altar in Korea. He answered he couldn’t. I asked his feelings about the incident. “What can we say,” he murmured. “What can the nation do for them?” I asked. “Repent and repent,” he answered. While we were having the conversation, four Korean college students walked in. I asked them how they arrived here. One of them said his father told him there was an altar in Beijing, too. I asked them what they believed had caused the tragedy. One criticized the elite for their lack of responsibility. Another blamed the group culture in a bureaucratic and corporate society. “There is no fairness in appointments and recruitment,” he said. “That leads to irregularities, negligence in management and oversight, as well as overall failure in the system.”

On the same evening, I had a dinner with a Chinese professor. The Sewol news naturally dominated our conversation. He said the Chinese took an interest in the South Korean education system after the ferry tragedy. “We were awed how students unquestioningly followed the rules and stayed below deck just because they were told to through the loudspeaker. If they were Chinese students, they all would have run outside and jumped into the sea. None would have believed or paid attention to the instruction.”

I was dumbfounded by this observation and could not make out whether it was a bad joke or not. “I think the Koreans are still under the Confucius teaching of being obedient to authority,” he added. I silently believed China was far from becoming a developed nation given its numerous accidents. But we are in no position to criticize others. Everyone, including the leaders and the people, has to be humble and go on repenting.