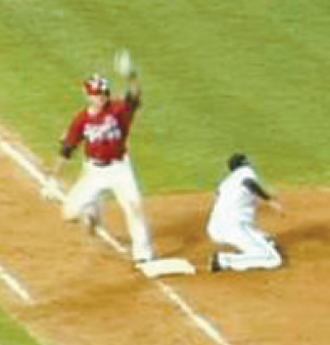 Brett Pill of the Kia Tigers is called out at first even though the LG Twins’ first baseman Kim Yong-eui’s right foot was not touching the base during their game on Friday at Jamsil Baseball Stadium in eastern Seoul. Screen grab from MBC Sports Plus

On Friday’s game against the Kia Tigers at Jamsil Baseball Stadium, the LG Twins, who recently lost their manager Kim Ki-tae due to their poor performance, were trying hard to end their five-game losing streak. But the Tigers weren’t making it easy for the Seoul-based team, with runners on second and first and two out in the bottom of the ninth while the Twins led 3-2.

A ground ball hit by the Tigers’ Brett Pill glanced off Twins closer Bong Jung-keun’s glove and rolled toward second.

Bong grabbed the ball and successfully threw it to first, diving onto the field to make the catch. First-base umpire Lee Gye-seong called an out, ending the game without a change in the score. Tigers’ manager Sun Dong-yeol complained about the call, but it wasn’t overturned.

But a video replay on a cable television station that aired the game proved that the final call was wrong.

The replay showed that first baseman Kim Yong-eui’s right foot was not touching first base when he caught the ball thrown by Bong, meaning the Tigers should have had another chance to score with the bases loaded. Manager Sun told reporters the next day that the Korea Baseball Organization should expand its use of video review, which is only limited to potential home-run calls.

The issue is snowballing as frustration over Friday’s game has combined with wrong calls made in past seasons.

Baseball insiders insist the KBO expand video review like Major League Baseball did this season to include many types of plays. In the MLB, up until April 14, calls by umpires were confirmed in 33 of 89 challenges and overturned in 30, according to the league. The other calls were kept because of unclear evidence.

Some say the bad calls are just a part of the game and that expanding video review would harm umpires’ influence on the field. Others say video review is necessary to give fans a higher quality of baseball.

In recent seasons, baseball fans and teams have come to seriously distrust umpires after a series of wrong calls were made. The KBO has been trying to improve the skills of its umpires, sometimes by punishing them and sometimes by teaching, but it hasn’t been enough. In the meantime, sports broadcasting technology has advanced.

Dozens of high-definition cameras are installed all over ballparks, and cable networks are providing slow-motion pictures that break a second of play into more than 10 separate shots in real time.

Team managers seem ready to accept a change. “I think allowing one or two video reviews per game will be fine,” manager Song Il-soo of the Doosan Bears said.

“I understand what KBO and umpires worry about,” manager Kim Kyung-moon of the NC Dinos said. “But I think it will actually help them make more right calls. It would be hard to make an adjustment in the middle of the season, but we should consider expanding it next season.”

People worry that umpires will lose their influence, but fans will not trust an umpire anyway if they see clearly on TV that he has made a bad call.

Whenever umpires are criticized for making wrong calls, it puts pressure on them not to make a mistake in the next game. But it is more rational to correct a mistake immediately.

Friday’s game between the Tigers and the Twins was just a regular season game, but what if it had been Game 7 of the Korean Series? Professional baseball started in 1982 when there were no high-definition cameras and the term “information technology” didn’t even exist, but now baseball is surrounded by devices that enable people to watch baseball in real time from anywhere, including subways and coffee shops.

Fans want to see umpires make the right call instead of standing in front of a group of reporters reading a written apology for their mistakes.