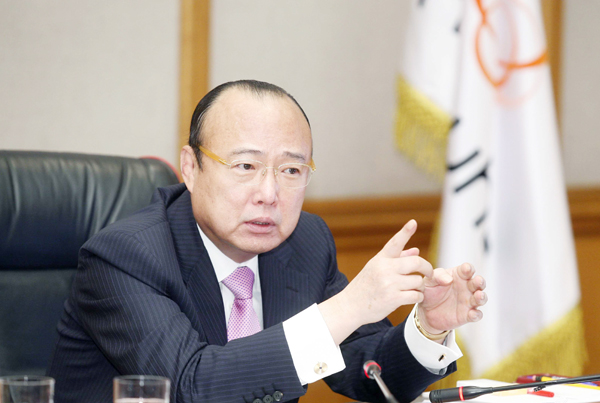 Hanwha Group Chairman Kim Seung-youn, who is undergoing treatment abroad for illnesses, seems to still be in control of Korea’s 10th-largest conglomerate through his sons, who are rising at the company while another CEO has stepped down.

Kim was convicted of breach of trust and embezzlement in 2011, and was sentenced to three years in prison, with five years suspended by the Seoul High Court. He officially became free in February, although he was released from jail last year due to his poor health.

The 62-year-old tycoon left for the United States last month in the company’s HL7277 plane to receive treatment for diabetes and other diseases.

Kim retired from his position as CEO at seven of Hanwha’s affiliates. The company said that Kim decided to focus on his health and that it is not clear when he will return to work.

Kim is technically not part of Hanwha’s management, but it seems the role of the emergency management council, which was formed last year to fill Kim’s spot, is shrinking, raising suspicions that the chairman is setting the stage for his return.

Hanwha Chemical CEO and Vice Chairman Hong Ki-joon, 64, submitted his resignation earlier this month, saying that he wants to open up opportunities to younger executives.

Hong was one of the council’s three leaders and has been a key decision-maker for Hanwha’s manufacturing businesses.

“If Kim is unable to manage the company due to poor health, Hong should be staying to fill the void like he has been, but it is strange timing,” an industry insider close to Hanwha said, requesting anonymity. “Hong is vice chairman, and not many people are more powerful than him in the group.”

Others speculate that Hanwha Group heirs are now moving up and that Hong decided to get out of their way.

The chairman’s first son, Kim Dong-kwan, has been leading Hanwha’s solar power business, which the group has been pushing as a future growth engine.

Kim, 31, is the chief strategy officer for Hanwha Q Cells, a subsidiary of Hanwha Chemical that Hong was in charge of.

Its solar business made an operating loss of 104 billion won ($100 million) last year.

But this first quarter, Hanwha claimed that it is expected to be in the black for the first time in 12 quarters and has put focus on the solar company in press releases.

The first son participated in the World Economic Forum in Davos, Switzerland, in January, and met VIPs from around the world on behalf of his father.