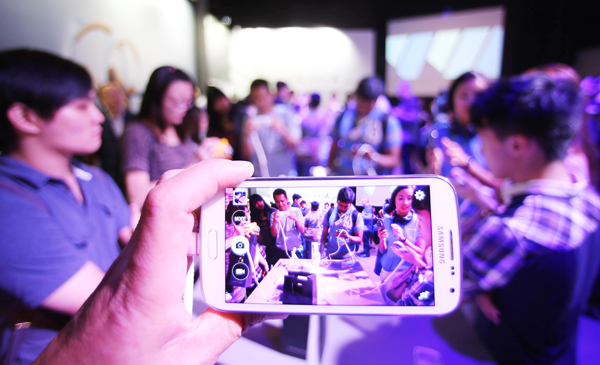 Customers try out Samsung Electronics’ Galaxy K zoom, a high-end smartphone with a stronger camera function, during Samsung Media Day yesterday at the Red Dot Design Museum in Singapore. Provided by the company

Samsung Electronics solidified its status as the world’s largest smartphone seller for the ninth consecutive quarter, while its consumer electronic business struggled compared to LG Electronics.

Samsung posted strong earnings, mainly in its mobile and semiconductor businesses, and LG saw noticeable growth in its TV and home-appliance businesses.

Market observers say the companies did relatively well considering the first quarter is traditionally an off-season for the electronics industry.

Operating profit was 3.3 percent lower than the same period last year but 2.1 percent higher than the fourth quarter of 2013.

“Sales of home appliances were weak as demand was low in the first quarter, but we sold 111 million mobile phones and 70 percent of them were smartphones,” said a spokesman for Samsung.

According to its earnings release, Samsung sold 111 million mobile phones in the first quarter and 13 million tablet PCs. The average sales price of mobile phones was $210.

It was the first time in three years that Samsung Electronics’ operating profit for its consumer electronics business fell below 200 billion won, and it was down 17 percent year-on-year.

Sales of its display division, which includes TVs, plunged 27 percent to 7.4 trillion won in the first quarter from the previous quarter. Compared to the same period last year, it edged up 0.7 percent.

On the other hand, LG Electronics’ home entertainment, home appliance, and air-conditioning and energy solutions divisions posted combined sales of 8.9 trillion won, up 0.5 percent from a year earlier, and 439.3 billion won of operating profit, up 125.7 percent from last year.

Compared to the previous quarter, which was a peak season for home appliances, sales fell 4.9 percent but operating profit jumped 68.1 percent.

Thanks to the strong performance of its TV and home-appliance businesses, LG reported 504 billion won in operating profit for the first quarter. That was a significant month-on-month and year-on-year improvement despite continuing losses by its mobile communications business.

Although LG’s home entertainment business declined 15 percent to 4.9 trillion won, it still rose 3 percent compared to the first quarter of 2013.

Operating profit soared twentyfold to 240.3 billion won on the back of robust sales of large and premium products such as ultra-high-definition TVs and organic light-emitting diode TVs as well as improvements in the cost of production.

While its home appliance division showed strong growth in the domestic market, sales fell in North America due to the strong won.

However, operating profit posted sharp growth of 7 percent from a year earlier and 31 percent from the previous quarter.

The upcoming World Cup is expected to boost the flat-screen TV market, and sales of ultra-high definition sets are forecast to expand steadily.

Both Samsung and LG are attempting to improve profitability by adding premium products in the home-appliance sector.

“In the second quarter, the LCD TV market is expected to grow compared to the same period last year. We will focus on leading the UHD TV and OLED TV market by cooperating with retailers and strengthening marketing strategies for new models,” said a spokesman for LG Electronics.