Purse strings not so tight for dessert

Purse strings not so tight for dessert 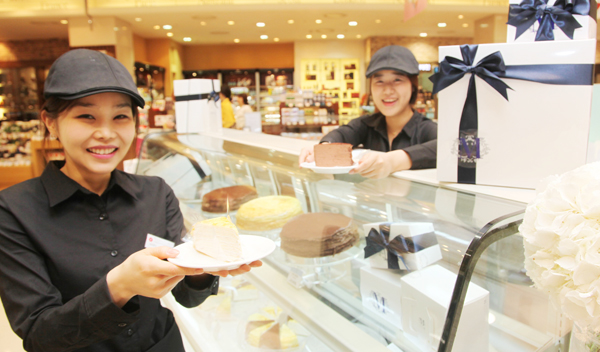 A view of Lady M Confections, a type of cake shop that will open today at four Shinsegae Department Store branches. Provided by the company

Having a bite of creamy cheesecake after a meal or a small strawberry tart with mascarpone filling has become an everyday event for many Koreans. The so-called dessert craze started years ago after people learned about Western desserts on overseas trips.

And although a sluggish economy has consumers tightening their belts, the desire for dessert has not been tamed. Local department stores realize it and are hoping to take advantage of Korean consumers’ sweet tooths.

Shinsegae Department Store said yesterday that it will open Lady M Confections, a cake boutique from New York, at four branches (Hoehyeon, Gangnam, Busan and Gwangju) today. According to the retailer, the most popular items at Lady M are the crepe cakes that have soft milk cream spread on numerous layers.

“Lady M opened as a cake boutique in 2004 on the Upper East Side of Manhattan, and it is a brand that many New Yorkers love,” said a spokesman of Shinsegae Department Store. “Korean consumers are now able to enjoy Lady M cakes at our stores.”

“With growing per capita income and westernized eating habits, desserts have become popular in Korea,” the spokesman said. “Despite the bad economy, dessert sales at our stores have increased at double-digit rates every year in recent years.”

Shinsegae said last year that dessert sales jumped 18.7 percent from the previous year. This is higher than the 12.4 percent growth for all food items in the same period.

“Demand for desserts seems to grow as people crave a bit of something sweet to relieve stress and anxiety,” the Shinsegae official said. He also noted that there are a growing number of consumers that make dessert an entire meal.

Ms. Kim, a 28-year-old office worker, for example, says she has a sweet dessert for lunch with coffee with her co-workers from time to time rather than going to a nearby kimchi jjigae (stew) store.

“Thinking about my health, I always eat rice and soup for breakfast before going to work,” Kim said. “Then, sometimes, I feel it’s a little too much to have another meal with rice and soup for lunch. Dessert and coffee can be an alternative.”

Lady M is just the latest of the many dessert brands that Shinsegae Department Store has introduced to Korean consumers, such as Mon Chouchou, a cake brand from Osaka.

In March, Lotte Department Store created a separate zone inside its main branch in Sogong-dong, central Seoul, where popular dessert brands like Cheesecake Factory and Junior’s are clustered in one place. The 66-square-meter (710-square-foot) zone is located on the ground floor of the department store.

A spokesman from Lotte said that Koreans no longer feel it is strange to have dessert after a meal and that consumers today want to relieve stress by eating high-calorie sweets.

“This has increased dessert sales not only in department stores,” the spokesman said. “There are many individual dessert shops opening out on the streets.”

“Desserts can be seen as a little luxury,” said an official from a retail consulting company. “They bring people pleasure.”