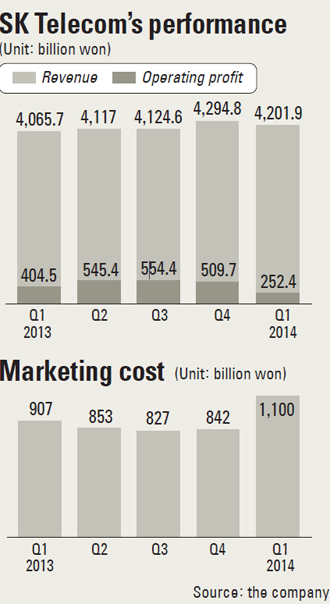 The company cited the government-enforced business suspension, a temporary increase in marketing costs due to intensified competition and compensation for damages as the main causes.

SK compensated 5.6 million customers for accidentally shutting down its network due to a technical glitch last month.

According to its quarterly earnings report, the company poured 1.1 trillion won into marketing, 21.4 percent more than in the same quarter last year. It spent about 1.4 million won in subsidies on certain phones to maintain its market share of 50 percent.

It is SK’s biggest marketing expense since the third quarter of 2012, when it spent 1.04 trillion won to take the lead in the long-term evolution market.

The company did not say in its report how much money it spent compensating customers, but industry sources predicted it paid out between 45 billion won and 50 billion won.

Its net profit in the first quarter declined 22.7 percent from a year earlier to 267.3 billion won.

But sales increased 3.4 percent from a year earlier thanks to more LTE subscribers and growth in the new business sectors.

The mobile carrier expects to recover in the second quarter since the average revenue per user is higher for LTE users than for 3G users.

Due to the government’s restriction on smartphone subsidies, SK also expects to spend less on marketing.

The company expects to see fast growth in B2B solutions, particularly for smart cars and asset management for freight and smart farms, which is at the core of the Internet of Things business sectors.