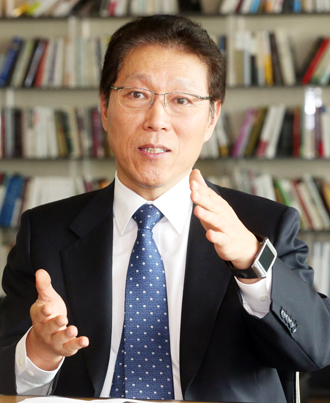 Kim Tai-yoo, a professor in Seoul National University’s department of industrial engineering, shook up the governmental organization with his innovative policies - creating a special employment system for engineers, naming the science and technology minister as deputy prime minister and integrating the national technology exam into the civil service exam. He was also the first information science technology aide of the late President Roh Moo-hyun.

Kim recently published a book on economic theory entitled “Economic Growth,” published by Springer, which touches on medicine, science and sociology. The JoongAng Sunday recently sat down with the engineer turned economist and asked him which direction the modern Korean economy should take.

Q. What sparked your interest in the theory of economic growth?

A. Germany and Japan were only two follower nations that succeeded in catching up to advanced countries. Korea and Taiwan only succeeded halfway, while China is now in the process. Brazil, Argentina and Chile are examples of failure. Those South American countries had a per capita income more than 10 times higher than that of Korea in the 1960s, but they failed right at the threshold of becoming advanced nations because they were walking in the wrong direction. Korea is also on that verge. We are No. 2 in the world in terms of per capita investment in research and development, following Israel. When it comes to total investment, Korea spends only one-fifth as much as Japan and one-tenth of the United States because we have a smaller population and national income comparatively. Korean society is also getting older faster than any other countries.

How should Korea catch up to those advanced nations under such circumstances? Working toward answering this question naturally led me to grow fond of economic growth theory. The answer can also be applied to advanced countries that are trapped in a low-growth trend. That’s why it is a general theory.

In general, the relationship between developing and advanced countries has been explained with the comparative advantage theory.

Suppose Korea is good at producing rice while Japan is good at manufacturing steel products. Based on the comparative advantage theory, it becomes mutually beneficial when the two countries swap their best items, with Korea only focusing on rice and Japan on steel. However, in reality, Korea cannot catch up with Japan, no matter how good the rice harvest is that year.

It’s a hole in the free trade theory. It is not coincidental that the gap between developing and advanced countries became even wider after the global trade system shifted toward the World Trade Organization (WTO) system, which pursues completely free trade, and away from the General Agreement on Tariffs and Trade (GATT), in which advanced countries implemented protectionist policies in developing countries in favor of their domestic industries.

A developing country has to accelerate industrialization in order to make the leap toward becoming an advanced country: from agriculture to light industry, to heavy industry and to knowledge-based industry. If the country doesn’t continually advance through this process, it can’t close the gap with advanced nations.

How should a government enhance industrial structure?

The government should take an aggressive approach in industrial policies, which concentrates a limited amount of resources and work force in creating productive values. Those who believe in markets say such a role should be left with the market, but that method already proved to be wrong after the Reagan administration in the United States and the Thatcher administration in the United Kingdom.

Germany, Japan, Korea and Taiwan succeeded following advanced countries with governmental industrial policies, whereas South American countries failed to do so after leaving that role to the market.

Government-led growth was efficient in the era of a copycat economy back in the 1970s, but aren’t we in need of smaller government in this new era?

The government should change its tune. Civil servants didn’t have to specialize in history when Korea was simply following the same path of other advanced nations. But that is not the case now. The Korean government should eradicate its rotating appointment system, which sees civil servants merely performing different tasks at different ministries. Instead, it should recruit policy specialists who have worked in a single field over a number of years, regardless of the borders among ministries.

For instance, environment-related positions not only exist at the Environment Ministry but also in the ministries of trade, industry and energy; land, infrastructure and transport; and oceans and fisheries. A civil servant who accumulates environment-related work experience at various ministries becomes a true policy specialist. When those officials become top-tier professionals in one area, they become more skilled at imposing efficient and necessary regulations, which naturally leads to less-excessive regulations.

One of the most efficient organizations is a sports team, in which athletes receive report cards at the end of each season that determine their annual salary. Such a system means Ryu Hyun-jin of the Los Angeles Dodgers will always play as a pitcher on whichever team he moves to, and the same with Lee Woon-jae [the former goal keeper for the national football team].

The system for civil servant appointments should mimic that of a professional football team. Each civil servant must have a specialty - just as strikers only attack and goalkeepers watch the goal line. This rotating appointment system - like a community soccer club in which one can be both a striker and a goalkeeper - doesn’t work anymore.

Korea’s aging society is another problem that needs to be tackled.

The average life span now stands at 80, compared to two decades ago when it was about 70. That leaves society with two times a population 60 and older to support. Mathematically, the economy can operate in a stable manner when the working population also doubles. So by the time these people are older, the working population should quadruple. As a result, an aging society can’t only be dealt with by implementing policies intended to boost the birthrate.

Dividing labor between generations, suggested in my other book “A Country Without Retirement,” is one solution. Of six major battles during the Japanese invasions of 1592-8, also known as the Imjin War in Korea, the first battle the Korean military won was the Battle of Haengju, led by general Kwon Yul.

Despite our troops numbering only one-third of Japan’s, they still won because they found strength in the division of labor. While women took a charge of the home front, all men were deployed in battle.

Once the average life span reached age 80, people couldn’t support themselves for the rest of their lives by only working over three decades. They needed to start saving double. In order to do that, the government must divide areas of labor among generations. Younger people should work in areas like manufacturing, cutting-edge technological services and industrial design, while people older than 50 should take charge in general service industries, such as the food industry and in administrative positions.

People will be able to divide their lives without retiring, where they work in value-generating areas between the ages of 25 and 50, and non-value generating areas after 50.

How can this theory apply in reality?

For example, the government can attract young people to value-generating jobs by offering incentives like tax waivers and providing employment insurance to small and midsize tech companies. It also can offer incentives to those non-value-added businesses that hire older workers and seniors.

The Park Chung Hee government sent young people from rural villages to the Saemaeul factories, which the government operated as part of rural development policies. The agricultural industry at first turned out a little less productive, but productivity later rebounded as the young people who entered value-added industries developed a new strain of rice and supplied cultivators and chemical fertilizers.

Such a cycle should be realized again so that Korea can become an advanced nation.

How should the government create value-added jobs?

After the capital’s globalization, labor and technology became the two most crucial elements in production. China created a tremendous number of jobs with a cheap labor force. Korea will be able to generate more jobs lowering technology prices by steering young people to choose value-added jobs. The country has the world’s cheapest technology prices in manufacturing cell phones.

In the future, science and technology will be most basic knowledge one must possess.

So the government should attract young people to enter science- and technology-related fields. The only way for a country like Korea to stay competitive is to lower technology costs by generating as many scientists and engineers as possible.