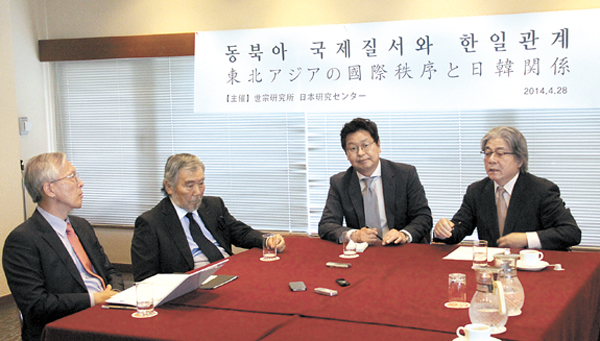 From left: Shin Kak-soo, a former Korean ambassador to Japan and vice minister of foreign affairs and trade; Yoshiji Nogami, president of the Japan Institute of International Affairs and former vice minister of foreign affairs; Jin Chang-soo, director of the Japan Center of the Sejong Institute; and Masao Okonogi, a professor emeritus in law at Keio University. By Seo Seung-wook

In a joint press conference Friday with President Park Geun-hye, U.S. President Barack Obama urged Japan to settle the issue of forced recruitment of women into sexual slavery before and during World War II. This was the first time a U.S. president officially criticized Japan’s wartime sexual slavery so strongly, analysts said afterwards.

“President Obama’s remarks on the comfort women issue were totally unexpected and came as a shock for Japan,” said Masao Okonogi, a Korean affairs expert and professor emeritus in law at Keio University.

On Monday, a group of four diplomacy experts held a round-table discussion at the Tokyo Press Center organized by the Sejong Institute, a Seoul-based foreign policy and security think tank, to evaluate the U.S. president’s visit to both Korea and Japan and the future of Korean and Japanese relations.

Japan’s refusal to officially apologize to its victims of sexual slavery, euphemistically referred to as comfort women, remains a point of contention and a cause of the tense diplomatic relations between Korea and Japan.

Washington has generally tried to keep clear of the two neighbors’ disputes over historical issues, but Obama said during his two-day Korea visit, following a three-day state visit to Japan last week, “This was a terrible, egregious violation of human rights. Those women were violated in ways that, even in the midst of war, were shocking.

He added that Prime Minister Shinzo Abe and the Japanese people also recognize “that the past is something that has to be recognized honestly and fairly.”

However, Japan generally downplayed this part of Obama’s message while he was in Seoul and instead interpreted his message as an exhortation for Korea to work with Japan in a forward-looking manner.

Yoshiji Nogami, president of the Japan Institute of International Affairs and former vice minister of foreign affairs, said that Obama pointed out in Seoul: “It is in the interests of both Japan and the Korean people to look forward as well as backward and to find ways in which the heartache and the pain of the past can be resolved.”

In the round-table discussion, Nogami said that many U.S. officials he meets think that Korea is too fixated on the past and that Obama said Abe recognizes that the past has to be acknowledged.

“This means that Korea needs to become forward-looking,” Nogami said.

Deputy Chief Cabinet Secretary Katsunobu Kato said on television late Friday, “This issue should not be made into a political or diplomatic subject.”

“The fact that President Obama addressed the comfort women issue shows not only that this issue is an obstacle in Korea and Japan relations but that this is an important issue on the violation of human rights,” said another panelist, Shin Kak-soo, a former Korean ambassador to Japan and vice minister of foreign affairs and trade.

The United States, he said, is requesting Japan speedily resolve the issue “on this premise [that] Japan needs to show more symbolic efforts towards healing the scars of the comfort women victims.”

The analysts weighed in on some options to resolve the issue, especially following the first round of a director-general-level meeting on the comfort women issue in Seoul last month, which will convene monthly.

Jin Chang-soo, director of the Japan Center of the Sejong Institute, proposed a two-plus-two method in which the governments and corporations establish a foundation to raise funds to compensate the comfort women victims. He also encouraged accurate history education through such a process. “If the two countries do not come to this kind of decision, this issue will continue on forever,” he said.

“Prime Minister Abe and President Park have to calmly talk over Korea-Japan relations including the comfort women issue,” Nogami said. “This is an issue that will not be resolved through some mechanism.”

Okonogi said a government-led fund to compensate Korean comfort women victims “is frankly difficult at the moment at any level, the greatest reason being because Korea requests Japan to take legal responsibility for the comfort women issue.”