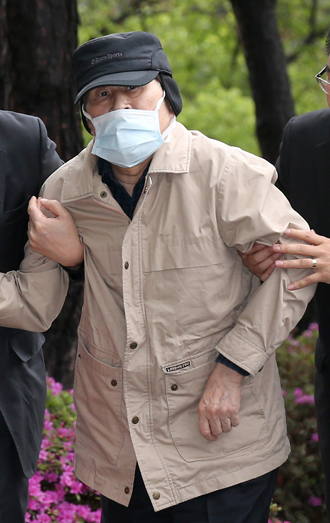 Kim Han-sik, the president of Chonghaejin Marine Company, the operator of the Sewol ferry, walks into the Incheon District Prosecutors’ Office yesterday. [NEWS1]

Prosecutors yesterday summoned the president of Chonghaejin Marine Company, the operator of the Sewol ferry, for questioning over corruption allegations revolving around the family that owns the shipping company.

Kim Han-sik is the first to be questioned as a suspect in connection with the investigation into the cause of the disaster, which has left more than 300 dead or missing.

The interrogation is part of an extensive probe jointly conducted by three prosecutors’ offices following a series of raids on April 23 and 28 on the houses and affiliates owned by Yoo Byung-eun, the de facto owner of Chonghaejin Marine Company, and his family.

Dressed in a white face mask and a black cap, Kim appeared at the Incheon District Prosecutors’ Office yesterday morning. There, authorities will seek to verify whether there were any underhand dealings between him and Yoo.

Prosecutors are also expected to look into allegations over whether Yoo misappropriated company funds and whether that involvement resulted in the ferry’s safety budget being compromised.

A close ally, Kim is accused of facilitating and covering up the Yoo family’s alleged misappropriations and mismanagement.

A prosecutor at the Incheon office said authorities have managed to obtain strong evidence proving that the Yoo family engaged in a number of illegal practices.

Among those allegations, the Yoo family stands accused of siphoning off company funds by charging royalty payments for using the name “Sewol,” which was registered by Yoo’s second son, Yoo Hyeok-gi.

“We found some evidence that Yoo and his sons set up companies specifically to take advantage of royalty fees,” said a prosecutor involved in the current investigation. “That means that some companies were not for running business but for pure financial exploitation.”

Prosecutors suspect that the operator relentlessly pursued profitability at the expense of passengers’ safety by overloading the ship’s cargo and redesigning the ferry to hold as many people as possible.

The beleaguered shipping company reported that the ship was loaded with approximately 3,600 tons of cargo the day it capsized on April 16, far higher than the allowed maximum of 986 tons.

Accounts by some survivors also revealed that the cargo aboard the 6,825-ton ferry did not appear to be properly fastened. A few containers fell into the water as soon as the ship began to list.

The prosecution ordered Yoo’s second son and a daughter to appear for questioning by yesterday, though neither has complied. The elder Yoo is expected to be questioned as early as next week.

Prosecutors continued to raid the offices of companies owned by the Yoo family to collect more evidence to press charges against them.

The writer, who identified himself as a Chonghaejin employee, accused the company of a plethora of unfair business practices in a thread entitled, “I lay accusation against Chonghaejin Marine Company,” which was uploaded three months ago on the Anti-Corruption and Civil Rights Commission’s free bulletin board.

He also accused Chonghaejin of operating a ferry called Ohamana despite its high accident rates.

The revelation has raised questions over whether similar online posts made prior to the accident went unnoticed or were dismissed.