Fortress may make it onto Unesco World Heritage List

Fortress may make it onto Unesco World Heritage List 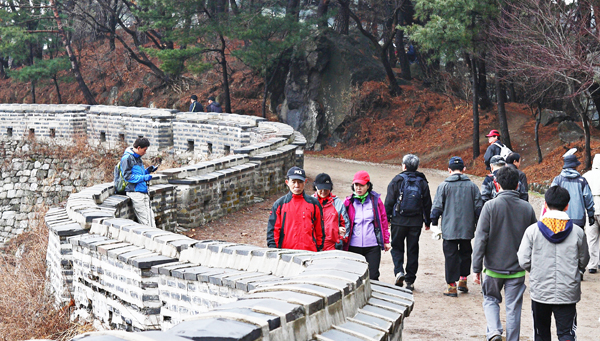 The International Council on Monuments and Sites, a consulting body to Unesco’s World Heritage Committee, recommended yesterday that the Namhansanseong, on the southeastern outskirts of Seoul, be inscribed. [NEWSIS]

Unesco’s World Heritage Committee will most likely place Namhansanseong (Namhan Mountain Fortress) on its World Heritage List in June in recognition of the structure’s architectural and natural harmony.

The International Council on Monuments and Sites, a consulting body to the committee, recommended to Unesco yesterday that the fortress, on the southeastern outskirts of Seoul, be inscribed, according to Korea’s Cultural Heritage Administration (CHA).

CHA added that items recognized by the council for their potential cultural value usually earn a spot on the Unesco World Heritage List.

The final decision will be announced at the 38th session of the World Heritage Committee in June in Doha, Qatar.

The fortress in Gyeonggi, one of the city’s most popular hiking destinations, is located on a plateau at an elevation of 500 meters (1,640 feet), making it the only fortress in Korea built at such an elevation, according to Choi Jae-heon, a geography professor at Konkuk University.

“Because it’s high up, people can look out over Seoul and observe the movements in the surrounding areas,” he said.

“Geographically speaking, the fortress is impenetrable because the south side has walls as high as 8 meters, and the north side is a cliff, and that feature made it the perfect shelter for the king and his subordinates in case of war,” Choi continued.

The fortress was renovated to its current form in 1624 during the Joseon Dynasty (1392-1910). Soon after its renovation, King Injo took refuge there during the Second Manchu Invasion of Korea in 1636.

Although there is no record of its construction in the Goryeo period (918-1392), there are some records from the Silla Dynasty (57 BC-AD 935) that allude to the fortress’s existence.

The consulting body to Unesco said that the fortress fits two of its criteria for a world heritage designation. The site is harmonious to the natural environment and exhibits human efforts toward architectural development.

The final evaluation will not be released until the final confirmation.

“Maximizing the advantages of the rugged terrain and locating various facilities inside the fortress made it possible [for the building] to function both as a city and a defensive structure,” CHA said last year.

If the Namhan Mountain Fortress is registered, Korea will have 11 properties inscribed on the Unesco World Heritage List.