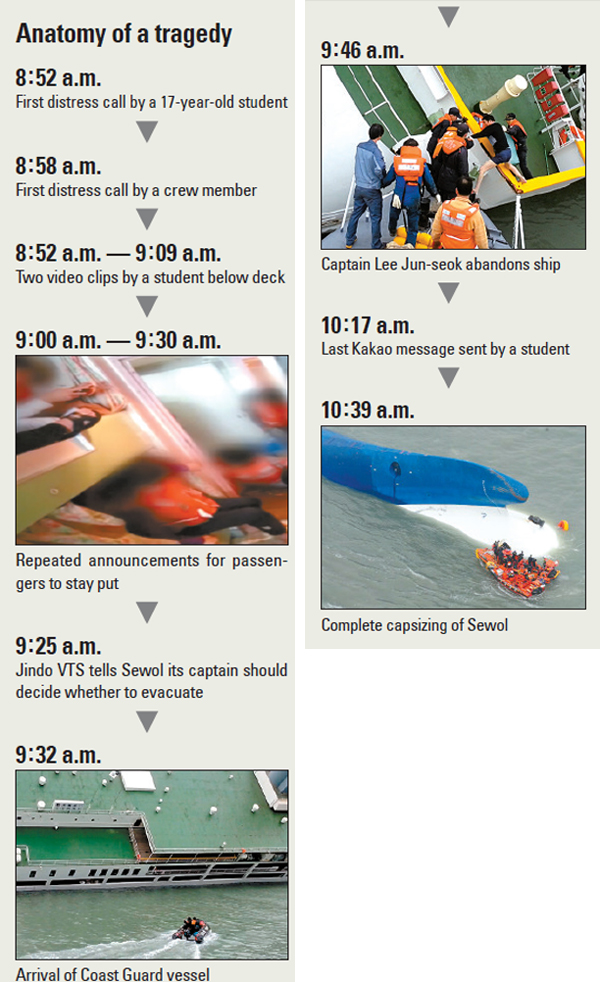 Two videos released to the public have given the most detailed look yet at the capsizing of the Sewol ferry - and, presumably, the moments leading up to the deaths of 205 passengers. An additional 97 are unaccounted for.

One video is a nine-minute collection of 49 scenes released by the Coast Guard Monday to show the public the state of the ship when it reached it.

The other is a remarkable testimonial from the grave. The video was taken by Park Su-hyeon, a 17-year-old student who died in the Sewol and whose remains were returned to his family last week.

Park used his phone to record two scenes below deck as the ferry was capsizing. His phone was returned to his parents along with the remains.

Park’s father, Park Jong-dae, released the video Sunday to broadcasting network JTBC, a sister company of the Korea JoongAng Daily. “I decided to provide the videos to help find out the exact cause of the accident,” he said.

The father said he viewed some parts of the two-part video but not all, because it was too “heartbreaking to watch.”

Instead of broadcasting the video, JTBC only aired screen grabs in consideration of victims’ families.

In the moments shown, students are seen calmly sitting on bunks as they are instructed by a voice over a loudspeaker not to move.

At one point, one student says, “I don’t have a life vest with me.” A student sitting next to him says, “Wear mine.”

The Coast Guard video, meanwhile, was supposed to placate an angry public by showing the serious state of the Sewol from early on in the capsizing. But it is having the opposite effect since the 49 scenes show a lackadaisical response by the Coast Guard.

In the first 50 minutes of the rescue, only one Coast Guard vessel and one inflatable boat get to the sinking ferry carrying 476 passengers, 325 of whom were 11th graders from Danwon High School in Ansan, Gyeonggi. Two helicopters hover around the vessel. A few fishing boats join rescue efforts to pull people drifting in the water aboard.

At no point are the rescuers seen trying to go beneath the deck to save the hundreds of passengers trapped below.

In a press interview Monday, Coast Guard representatives tried to answer questions as to why they didn’t enter the listing vessel to save people inside. They claimed it was “too steep” for them to climb up the deck.

Here is the fullest description yet available of the last 111 minutes of the Sewol.

The disaster began at around 8:48 a.m., when the five-story vessel began listing to the port side after making a sharp turn in waters 11 miles off Paengmok Harbor in Jindo, South Jeolla, on the morning of April 16.

Noticing something was wrong, a Danwon high school student surnamed Choi, whose body was found last week, made the first distress call to a 119 emergency hotline at 8:52 a.m., which was transferred to the Mokpo Coast Guard. At 8:54, the Coast Guard asked the student for the latitude and longitude of the ferry. It took a total of four minutes for the Coast Guard to dispatch rescue ships to the site.

When Choi made the first distress call, Park Su-hyeon started filming his classmates in a fourth-floor cabin.

Despite growing anxiety, students followed repeated commands from the ship’s crew to remain where they were. One part of the video, which recorded the scene inside the fourth-floor cabin from 8:52 a.m. through 8:57 a.m., records chatter among the classmates.

At 8:55 p.m., the crew of the Sewol made its first distress call to the Jeju Vessel Traffic Services. In the second video clip from Park’s phone, which shows scenes from 8:59 a.m. through 9:09 a.m., another announcement instructs the students to stay put.

“This reminds me of ‘Titanic,’?” said one student, humming a few bars of the film’s theme song.

“Please do not move and remain where you are,” says a male voice.

Answers of “Yes” from the students are heard.

“Are we really sinking into the sea?” asks one student.

“Is teacher okay?” worries one student. “I received a Kakao message. [The teacher] asked us if we are alright.”

It is believed that many of the students in the clips are among the dead or unaccounted for. From 9:00 a.m., the crew of the Sewol made six announcements over 30 minutes telling passengers not to move. During that period, 23 crew members, including the captain, prepared to leave the ship themselves.

During communication between the Sewol and the Jindo Vessel Traffic Services between 9:25 a.m. and 9:26 a.m., the authorities leave it to the captain to decide whether to evacuate the passengers.

“The captain should decide on the evacuation,” the Jindo Vessel Traffic Services tells the person on the radio, who was a first mate and one of the 23 crew members who were eventually saved.

"I just asked you if they [passengers] could be rescued right away [by rescue boats],” said the first mate.

At 9:32, a 100-ton Coast Guard rescue vessel arrived at the ailing ship. The sixth scene recorded at 9:35 a.m. shows one helicopter hovering above the Sewol, which lists at about a 45-degree angle. No one is on the top deck - passengers are still obeying the crew’s command to stay inside the sinking 6,825-ton ferry.

At 9:42, an inflatable rubber boat rescues seven crew members who had been on the third-floor deck. No other rescue boats are seen. The top deck is still empty.

At 9:46, Captain Lee Jun-seok, 69, climbs from the heavily listing ferry into the Coast Guard ship, dressed in a long-sleeve shirt and underpants. Lee did not tell the rescue team he was in charge of the ferry. The video contradicts the captain’s claim to an investigation team that he was injured and unable to save any passengers. In the video, he climbs steadily off the ferry and into the rescue boat.

When asked Monday why they saved the ferry’s crew while hundreds of passengers were trapped inside, Sergeant Lee Hyung-rae, a rescue worker, said they could not distinguish crew members from passengers because they were wearing life vests, which obscured the uniforms they wore underneath.

The Coast Guard said Monday they advised passengers inside the ship to leave the ship via its own loudspeakers but acknowledged the warnings might not have been heard below deck because of the noise of helicopters.

At 10:06, about 30 minutes after the rescue boats’ arrival, rescue workers smashed a window on the third floor with a hammer to rescue seven passengers from inside. But still no rescue worker tried to enter the ship.

At 10:17 a.m., a student trapped inside sent a message via Kakao messenger service. It was the last message sent from the sinking ferry.

“They told us to wait. There has been no announcement since,” wrote the student to a family member more than 30 minutes after the captain had stepped off the sinking vessel. The student’s identity was not disclosed by the authorities. The fate of the student was also not publicly disclosed.

At 10:39 a.m., 22 minutes after the Kakao message was sent, the ferry capsized completely with only the tip of its bow protruding out of the water.

A Coast Guard Special Forces team departed from Mokpo Harbor, South Jeolla, at 10:11 a.m. It arrived at the site at 11:24 a.m., nearly an hour after the ship capsized, and attempted to enter the ship. The ship was now almost completely underwater with its stern at a depth of about 100 feet.

Their attempt was thwarted after only 16 minutes because of strong underwater currents.