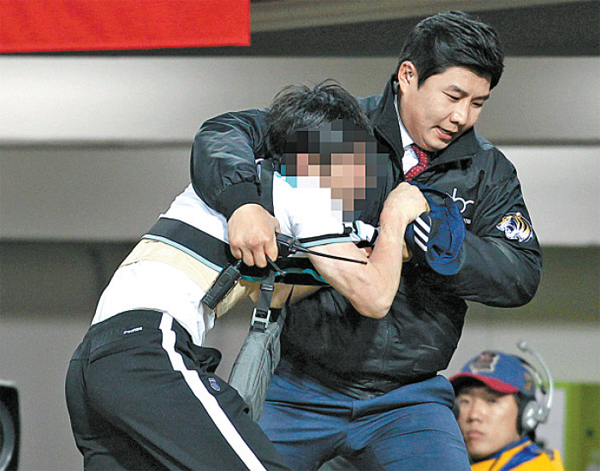 A drunken fan is taken away by a staff member of the Kia Tigers after attacking umpire Park Keun-young in the top of the seventh inning on Wednesday at the Gwangju-Kia Champions Field.Provided by the Kia Tigers

A headlock in the middle of a game by a drunken fan, abusive words all over the Internet and children who won’t tell their friends their father is an umpire.

It’s going to be a long season for the Korea Baseball Organization’s men in black.

In the top of the seventh inning in Wednesday’s game between the Kia Tigers and SK Wyverns at Gwangju-Kia Champions Field, a drunken fan hopped the fence on the right-field line and got first-base umpire Park Keun-young in a headlock.

Wyverns first-base coach Baek Jae-ho and some security guards separated the two and pulled the perpetrator off the field.

“He looked like he was mad at some calls the umpires made in the game,” said a Tigers spokesman.

The incident occurred after Cho Dong-hwa - with the bases loaded and Kia leading 6-3 - hit a ground ball to second with one out that looked like it might be a double play to end the inning. Park called Cho safe on the play, which was so close even the video replay was inconclusive.

As Tigers manager Sun Dong-yeol came out from the dugout to complain, the hometown fans had expressions on their faces that said, “God, another wrong call?”

It was an ugly end to a bad week for umpires, who made so many wrong decisions in several games that there have been calls from players, analysts and fans to expand the use of instant replay, which is currently limited to disputed home runs.

Another wrong call was made at Champions Field on Tuesday, when Cho of the Wyverns attempted to steal second in the top of the second inning. Second-base umpire Na Gwang-nam called him safe, but a replay clearly showed he was out. The Wyverns went on to score six runs in that inning and wallop the Tigers, 18-5.

Na was replaced with Park Keun-young, who was jumped by the drunken man next day.

The KBO said after the game that Na had been replaced because he showed symptoms of food poisoning, but speculation was that his bad call had something to do with it. Na has been hospitalized since Wednesday, the KBO said.

But it looks like Na isn’t only suffering from food poisoning. “I think he [Na] was traumatized after making the call and seeing tons of abusive messages on the Internet,” said one of his colleagues. “He has been an umpire for about 20 years, and I think he is having the toughest time in his career. I feel very sorry for him and also am afraid of making a mistake like he did.”

The colleague said the replacement was requested by Na himself. “I think he felt huge pressure that he might make another mistake in that game,” he said. “Because he was the crew chief, he decided to work the game even though he wasn’t in good shape physically.”

Most families of baseball players are proud that their son or father plays one of the country’s most popular professional sports, but it is a whole different story for the families of umpires.

“Most of us tell our children not to tell their friends their father is a baseball umpire because we worry about our children being ostracized by friends,” said one umpire, who - naturally - requested anonymity. “If the child is very young, it may not be a big problem, but for those umpires with teenagers, they always worry about them feeling hurt after they read abusive messages about their father. We just advise our children to respond that their father is a worker at a conglomerate when they were asked his occupation.”

Since umpires are under huge pressure and teams and fans never stop complaining, the KBO, which has been skeptical about any expansion of video reviews, is considering making an adjustment.

“We are considering many options to develop a good system, and monitoring how Major League Baseball operates its system will be part of the process.”