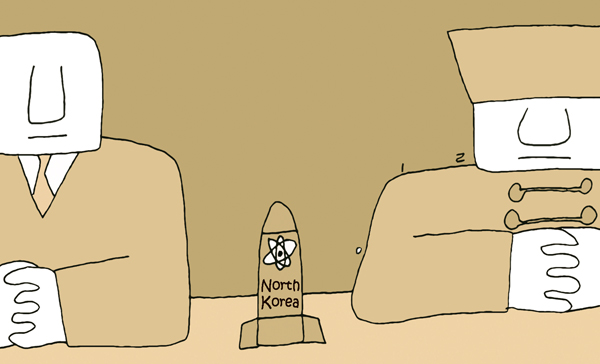 South Korean and Chinese leaders have one topic they never get tired of at summits - North Korea’s nuclear program. We are the pleading side, asking Beijing to play a constructive mediating role. No one can deny Beijing’s influence over Pyongyang as an ideological mentor and sole economic and financial patron. We wait for Beijing’s actions, hoping they might be different this time. So far, China has been consistent on the issue - support peace and stability of the Korean Peninsula, denuclearization and a peaceful solution through dialogue.

Beijing recently added another guideline to its approach toward the North Korean nuclear problem. Chinese President Xi Jinping, during summit talks with South Korean President Park Geun-hye on the sidelines of the Nuclear Security Summit in The Hague in March, reaffirmed Beijing’s opposition to North Korea’s nuclear weapons program and that it was trying to persuade Pyongyang using the “Chinese way.”

The so-called Chinese way is a new policy being implemented to deal with Pyongyang’s weapons program. Application of the Chinese way in foreign affairs was first championed a year ago. Foreign Ministry spokeswoman Hua Chunying in a regular press briefing said Beijing would take a more active role to help bring peace to the Middle East. She said China will continue to play a positive role in the Palestinian-Israeli peace talks through “its own way.” Xi invited Palestinian and Israeli leaders to Beijing for talks.

Beijing, which had been content to remain in the backseat in international conflicts, has moved toward the central stage to play more active role.

Last May, Chinese Prime Minister Li Keqiang visited India and Pakistan on his first overseas trip. Beijing was sending a clear message that it would get more involved in global political issues. It has been independently vocal on recent high-profile international conflicts involving Syria and Ukraine. Beijing wants to get actively involved in globally contentious issues, including the North Korean nuclear program, albeit on its own terms.

In his meeting with UN Secretary General Ban Ki-moon at an international conference addressing the conflict in Syria where the military regime used chemical weapons against civilians, Chinese Foreign Minister Wang Yi laid out Beijing’s principles for getting involved in foreign issues, encapsulating the nuanced and general Chinese way on the external political front. First of all, when it comes to handling other countries’ domestic affairs - whether it is North Korean nuclear tests or violence in Syria - it prioritizes “non-interference” and opposes meddling by U.S.-led Western powers. Second, Beijing will work within the UN framework. Third, it supports political settlement over any level of military intervention and “inclusive” political transition, suggesting it opposes any overthrow of legitimate governments. Fourth, Beijing will remain “objective and just,” deciding its position according to developments, not its own interests. Fifth, a conflict should be settled based on respect for the will of the people in the country as well as support from other countries. Wang said China wants sustainable, incremental and fundamental solutions. The Chinese way Xi suggested to address the North Korean nuclear program in his meeting with Park may be based on the same policy principles.

When applying this stance to North Korea, we can surmise that Beijing will refrain from outright meddling, telling Pyongyang what or what not to do. Cui Tiankai, China’s ambassador to the United States, said during a Washington conference the United States was giving China “a mission impossible” by demanding it use its influence over North Korea and force it “to do this or that.” It will, however, go along with UN-led decisions on North Korean nuclear provocations. China wants to build greater power on the international stage without appearing to be an intimidator.

Beijing has learned this strategy from Washington, observed Susan Shirk, an expert on Chinese affairs and former U.S. deputy assistant secretary of state. The United States created world peace-keeping and aid organizations like the UN so it could work behind the scenes rather that at the forefront. Under such an international framework, other countries would feel less threatened and annoyed by U.S. influence. Likewise, Beijing wants to work within the parameters of multilateral groups.

China would insist that the North Korea issue be resolved through diplomatic procedures. It is why it emphasizes six-party negotiations. It opposes regime change that could have a global spillover effect. China will decide for itself what is right and wrong and won’t seek only to satisfy its own interests, which could mean Beijing won’t charge into Pyongyang to take control in the event of major unrest or civil war. It will seek solutions that are agreeable to all countries involved. On the North Korean issue, it could mean that the will of related countries, including China, should be reflected as much as the wishes of the two Koreas.

In conclusion, the Xi Jinping government will get involved in international issues and seek fundamental and incremental solutions through diplomatic procedures and multilateral frameworks. At the end of the day, Beijing is playing it clever and safe. We cannot change how Beijing acts. Instead, we must study its intentions and try to bring them closer to ours. Because Beijing is willing to cooperate under multilateral platforms, we must try to persuade China to play a bigger role through six-party or other multilateral processes to maintain international efforts to solve the North Korean nuclear issue. A fight is always easier when we know who we are playing with and against.