Exports hit their 2nd-highest level ever in April

Exports hit their 2nd-highest level ever in April 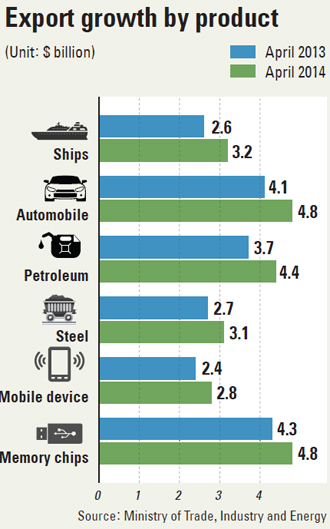 Exports soared to $50.3 billion in April, the second-highest monthly total ever, thanks to more shipments of mobile devices, automobiles and home appliances to the United States.

According to the Ministry of Trade, Industry and Energy, last month’s figure was just $160 million shy of the record set in October.

“As the U.S. economy got better for the past few months, we saw inquiries and visits by American buyers to Korean export companies shoot up,” said Kwon Pyung-oh, deputy minister for international trade and investment, yesterday.

With the United States, mobile phones represented nearly 55 percent of the month-on-month increase in export value, as Samsung’s Galaxy S5 and LG Electronics’ mid-range Lucid 3 were introduced in the middle of last month. Automobiles and home appliances each increased about 26 percent.

Most export flagship items saw increases in export value, with the exception of LCD displays, which actually sold more units than in April 2013 but saw an 8.6 percent decrease in value.

Exports of ships were $3.2 billion, up 23 percent compared to last April, reflecting sales of various specialized ships for drilling and chemical shipping.

Automobiles sold $4.8 billion overseas, a 19 percent increase, largely because sales of new models of Hyundai’s Genesis and Kia’s Soul expanded in the United States and European Union countries and the average price of those cars increased about 5 percent to $16,072.

Steel exports were $3.1 billion, up 17 percent compared to last April. Even though the unit price dropped, the United States, China and Japan purchased 150 percent more of them.

Memory chip exports were $4.8 billion, up 12 percent, thanks to a worldwide trend of purchasing or upgrading personal computers after Microsoft pulled the plug on support for Windows XP.

As Samsung launched its smart home service in 11 countries including the United States and United Kingdom in early April, exports of home appliances increased 6 percent to $1.5 billion, mainly due to purchases of new models, such as refrigerator and washer, to catch up with the trend.